Overseas travelers out of Incheon break a record

Overseas travelers out of Incheon break a record 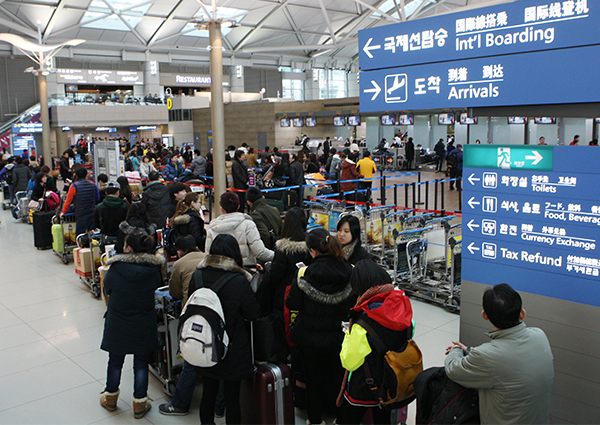 Travelers crowd Incheon International Airport yesterday after the number of Koreans leaving the country through the airport set a record last month of 1,079,911, breaking the previous July 2007 record of 1,030,000. Provided by the airport


Kim Ji-sun, a 34-year-old homemaker, enjoys family outings at Incheon International Airport because she lives nearby.

Recently, though, all the parking lots at the airport were full when she and her family tried to go for dinner. They had to park their car on the side of the road.

“I have been visiting the airport for 10 years and never have I seen so many vehicles until that day,” marveled Kim.

Kim wasn’t mistaken. The number of Koreans leaving the country from Incheon to go on overseas trips set a record last month when 1,079,911 people took off, breaking the previous record of 1,030,000 in July 2007, the Incheon International Airport Immigration Office reported yesterday.

About 150,000 more people used the airport to depart from Korea in January than the same period last year.

The reasons are two w’s: the won and the weather.

“We attribute the jump in the numbers to a stronger won and the unusual cold spell that has swept the country this year,” said An Jae-geum, official at the immigration office.

Since the won broke the 1,100 mark against the U.S. dollar last November, the Korean currency has continued its appreciation, reaching 1,065 won per dollar last month. A stronger won makes it cheaper for Koreans to go overseas.

And in a few days, Lunar New Year travelers will head to Incheon (and also to Gimpo, which has some international flights).

Authorities at Incheon, one of the world’s top airports, expect around 260,000 people will depart Korea during the Lunar New Year holiday, which begins from Friday and lasts through Tuesday.

And for both travelers and casual visitors like Mrs. Kim and her family, the airport recently opened a temporary parking lot for roughly 1,000 vehicles in addition to its existing parking space with its 10,000-car capacity.