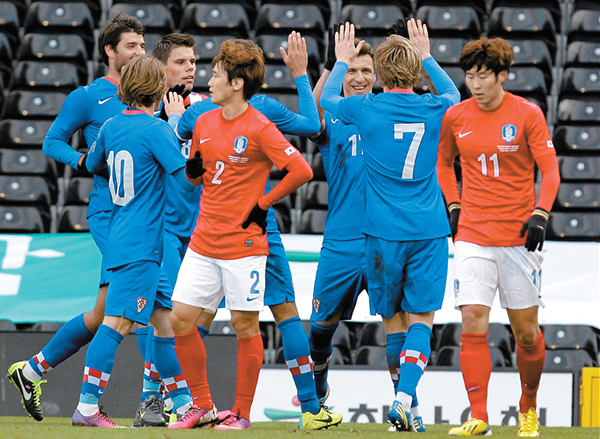 Croatia’s Mario Mandzukic, third right, celebrates a goal with teammates during the team’s rout of Korea in a match at Craven Cottage in London on Wednesday. [AP/NEWSIS]

Choi Kang-hee did his best to polish a forward line that has lacked sharpness in recent months when he summoned nearly all available offense resources from Europe in a World Cup build-up game against Croatia.

Instead, a humiliating rout to the Balkan country Wednesday reminded the Korean national football coach of a more serious issue: defense.

“Defenders were unsuccessful in their positioning when allowing the goals,” Choi told reporters after Korea suffered a 4-0 thrashing to Croatia. The game at Craven Cottage in London Wednesday night (Korean time) was filled with star European league players.

“When the opposing strikers infiltrated, they should’ve been prepared in advance and secured a good position to defend, but that didn’t work the way I wanted it to.”

It was the fourth time in a row that Choi’s squad has failed to come up with a win, including a 2-1 loss to Australia in another tune-up match in November. Korea also lost its most recent World Cup qualifier to Iran 1-0 in October after a 2-2 draw with Uzbekistan in September.

The back line has long had problems and was still shaky early on in the Croatia match. Lee Jung-soo of Al-Sadd in Qatar, 33, who is supposed to be the backbone of the defense, made several mistakes including a pass error with Shin Hyung-min of Al Jazira that nearly allowed Ivica Olic a goal.

Olic, a forward for VfL Wolfsburg, blew another chance on an error between Lee and Korea captain Kwak Tae-hwi in the 28th minute. Only four minutes later, however, Mandzukic scored after Lee failed to catch him.

Choi Jae-soo, a Suwon Bluewings left back, made his international debut in the Croatia match to fill the vacuum left by struggling Park Joo-ho of FC Basel, but he appeared to be overwhelmed by the speed and power of his European opponents, signaling that Choi’s quest to find stable resources for the position isn’t over yet.

Choi Chul-soon, of the Sangju Sangmu Phoenix, provided a glimmer of hope with his assiduous play from the right back after he replaced Shin Kwang-hoon in the 72nd minute.

The offense remained lackluster for Korea too, with the striker duo of Lee Dong-gook and Park Chu-young once again failing a test of their cohesion by providing few threats to Croatia. Choi hinted that the test will continue, at least for now. “We can’t make a drastic decision only based on the result of one game,” Choi said.

Son Heung-min, a wunderkind at Hamburg SV, was also largely invisible and was replaced by Kim Bo-kyung of Cardiff City in the second half. He was unsatisfied with his play.

“I could’ve done better, but it appears that it was all the same,” Son said. The 20-year-old forward has only scored one in his previous 10 games for Korea.