Old coaches have high hopes for Yun at QPR

Old coaches have high hopes for Yun at QPR 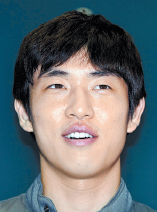 Yun Suk-young, newly signed by Queens Park Rangers, might have been able to help Korea during the national team’s embarrassing 4-0 loss to Croatia Wednesday night had the 22-year-old defender not been busy with procedures involved with joining the English Premier League club.

QPR, desperate to escape the relegation zone, likely hopes it’s not too late for him to help them. And two of Yun’s old mentors are optimistic about his ability to provide the aid the English team needs.

Kim In-wan, coach of the K-League Daejeon Citizen, and Kim Dong-gun, coach of the football team at Jangheung Middle School in South Jeolla, both said in recent interviews with the Ilgan Sports that Yun’s industriousness impressed them no less than that of Park Ji-sung, who is now Yun’s teammate.

Yun, formerly a Chunnam Dragons defender, signed with QPR on a three and a half year contract and may be able to make his Premier League debut when the team goes against Swansea City on Sunday.

QPR is still at the bottom on 17 points from 25 games, but four straight draws have provided fans with hope.

“With his ability, Suk-young will be able to perform well in the Premier League,” said Kim In-wan, who coached him at Gwanyang Jecheol High School in South Jeolla.

“Suk-young is good at defense, of course, but he’s also good at offense and will make an impressive contribution to the offense using his specialties, such as overlapping and left-foot crossing,” the coach said.

Kim said that he brought Yun to Gwangyang from Jangheung Middle School after seeing him play.

Yun, who now stands five feet nine inches and weighs 163 pounds, was much smaller in middle school, but his merits offset his size, Kim said.

Kim Dong-gun, who has long been at the helm at Jangheung, remembered Yun always being on the go in training. Yun started his football career at 12, later than many other boys his age, and always felt he had something to prove, Kim said.

Yun actually delayed his graduation from elementary school by one year to perfect his basic skills. “He was a kid that trained while others were having fun,” Kim said.

Yun said he went to sleep at 9 p.m. every day so he’d be ready for early morning training during his school years. He said he wouldn’t return home without putting the ball into the back of the net at least 10 times a day.

“He may have had a feeble frame for a player, but his speed and his ability with his left foot is really good,” Kim In-wan said. “Above all, he has good character.”