‘Behind the Camera’ director works his magic - via Skype

‘Behind the Camera’ director works his magic - via Skype 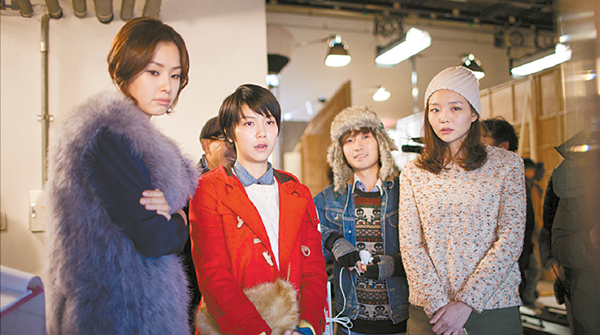 “Behind the Camera” blurs fiction and reality by telling the story of its own production, which takes place from afar via mobile devices. Provided by Filament Pictures

Cutting-edge technology, empowered by the spread of smartphones, has shifted the way many professions work. But film maker E J-yong decided to take the trend to an extreme by making a movie about directing via mobile devices without being on set.

The result of his audacious attempt is “Behind the Camera,” slated to hit theaters on Feb. 28.

“The world is changing thanks to the Internet and mobile devices. We can do so many things on computers. I work on a scenario at my desk, search the Internet for some reference material, read Twitter and watch movies. It is possible to do so many things without moving here and there,” he said. “So, production of this movie began from the idea that we can direct a movie remotely. We made the movie using every communication method currently available. I think this represents the future of film production. Ten years from now, remote direction may be common.

Blurring fiction and reality, Lee’s latest feature is considered a “mockumentary” about remote directing. The director takes the genre a step further than he did with “Actresses” (2009) by including himself in the cast. 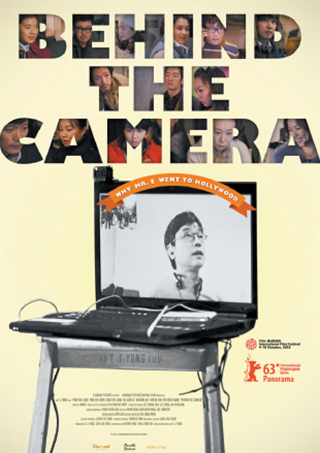 The experimental feature unfolds as E unveils his idea to potential cast members. He attempts to direct the film from Hollywood via Skype.

Things quickly grow complicated, and the set turns to mayhem as actors and crew members argue with each other. The unconventional setup quickly frustrated some of the bigger names in the cast, including Yoon Yeo-jung, Lee Honey, Kim Nam-jin and Kim Min-hee as well as film maker Lee Joon-ik.

“I got a call from E and he asked me for two days of my time,” Yoon said of her first encounter with remote directing. “He didn’t specifically mention the movie over the phone, and when I arrived, there was no director.”

She agreed to take part in the unusual project, having previously worked with E on “Actresses.” Yet, the actress admitted that she never quite understood E’s motivations for his latest movie.

“I couldn’t understand what was in his mind then, and it’s the same now,” she explained. “I have no idea about this movie’s main concept or what kind of message the director is trying to deliver.”

That very frustration, E said, could actually be part of the message he aims to deliver through “Behind the Camera.” Since less than half of the film was scripted, the director said he was often unsure of whether the actors’ complaints were real or rather exaggerated for production’s sake.

“As the actors were given more self-control, I was unable to know whether or not their complaints were real,” he explained. “There was an unclear division between real and fabricated problems; they were all mixed together. I had trouble distinguishing between the complaints even when they were about me.”

Much in the same way, many scenes in “Behind the Camera” leave the audience wondering whether certain elements are dramatized.

“The film seems to be a documentary about the production process of a short film, but it also has dramatic elements similar to a reality show,” E said. “It is difficult to decide how to classify the film in terms of genre.”

Though such confusion could potentially doom some films, domestic and international critics seem to have taken kindly to the vagueness inherent in the film.

Wieland Speck, director of the panorama section, also took note of E’s film on the festival’s official Web site, saying that “alongside works by European filmmakers, such as Lars Kraume and Felix van Groeningen, films from Asia - and especially from Korea - have made a deep impression.”

E’s hard-to-define flick is sure to challenge those who believe the Korean movie scene is too mainstream.