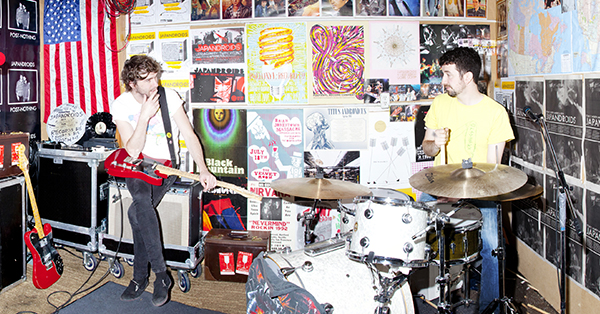 Vancouver, Canada-based Japandroids are Brian King, left, on guitar and vocals, and David Prowse, right, on drums and vocals. Photo by Leigh Righton

There’s plenty of this kind of music out there - a couple of guys, a guitar, drums, vocals - but there isn’t much of it as good as Japandroids.

Their two most recent albums, “Post-Nothing” (2009) and “Celebration Rock” (2012), are start-to-finish full of songs for rock purists.

Brian King and David Prowse have taken rock ’n’ roll, stripped it down to its most basic elements, and rebuilt their songs into sleek, powerful machines.

Hailing from Vancouver, the band is playing in Busan on Wednesday and Seoul on Thursday.

The band was named 2012’s Band of the Year by Spin Magazine and Pitchfork ranked “Celebration Rock” as the 11th best record of the year. This is a big turnaround for a band that nearly broke up for good in 2009, convinced they weren’t going anywhere.

In a telephone interview with the Korea JoongAng Daily, Prowse spoke about almost quitting, the rise of the two-piece band and being called “Dad rock.”

“Ever since the band had its near death experience, we’ve felt the band exists on borrowed time,” Prowse said. “We don’t have any illusions that the band is going to last forever.”

Call it memento mori, or simply just appreciating the time you have together. Either way, the band plans to ride it as far as they can.

“We love touring, we love making music,” Prowse said. “We’re definitely excited to be in this business. We know we can just pull the plug if it gets too bad.”

Because there’s nothing worse than going to see your favorite band and watching them phone it in.

“We’re still music fans at heart,” Prowse said. “We’ve had those experiences. We don’t want to do that.”

The band has been on tour in New Zealand and Australia before hitting Korea.

“This is pretty unchartered territory,” Prowse said. “We’re looking for weird, fun adventures. We have the best job in the world. We get paid and get free drinks to travel the world and play music.”

They haven’t played much in Asia, only at Japan’s Fuji Rock Festival, and they’re hoping to have a memorable experience in Korea.

“Everyone has had great things to say about Korea,” Prowse said. “But we’re not really sure what to expect. We don’t even know what the skyline looks like.”

The guys are known to like to party. Prowse said he was hoping to drink “just the right amount of soju,” not too much, not too little.

Last year, the U.K.’s Guardian ran a story titled “From the White Stripes to the Japandroids, two-piece bands are now the industry standard.” Prowse said their inspiration came from a band fronted by Karen O, a Korean-Polish woman who grew up in the United States.

“Brian and I knew each other. We liked the same kinds of music, originally liked the Yeah YeahYeahs’ setup, but that never really materialized. We felt pretty OK about how we could play our instruments, but neither of us felt like we were really good singers. Eventually we felt like we could just do it ourselves. You can make great music, put on great shows, with only two people in a band.”

When mentioning the prospect of setting up this interview, an acquaintance disparagingly labeled the band “Dad rock.” The term connotes rock music from the 60s or 70s a father might try to get his son or daughter to listen to. It seemed fair to give the band a chance to defend themselves.

“Well, we’re not young men anymore,” Prowse, who is 30 now, said. “I guess we’re not making music for young kids. I’m glad someone told us eventually.”