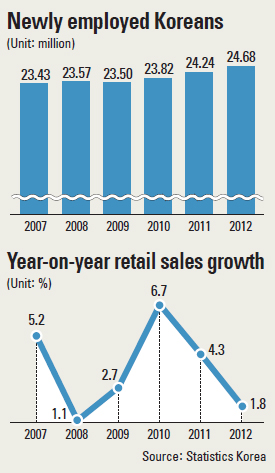 Anemic job growth and consumption are hampering Korea’s economic growth, despite stabilized inflation and improving industrial output, investment and exports, according to a Ministry of Strategy and Finance report released yesterday.

The job market, especially for people in their 20s, has been a problem since the beginning of last year, and the report said job creation remains weak. About 277,000 jobs were added in December, down from the 2012 peak of 685,000 in September.

The ministray said the consumption index likely continued to fall in January, citing the Dec. 31 expiration of a tax credit for auto purchases.

The ministry said the country faces uncertain economic conditions because of the potential for automatic budget cuts in the United States that could delay recovery in Europe and trigger currency exchange rate instability worldwide.

“The Korean economy is showing frequent changes in its overall pattern due to recent short-term volatility,” said Lee Hyoung-il, a director at the Economic Policy Bureau of the ministry. “We will continue to closely monitor internal and external economic situations, while making policy efforts to enhance overall economic vitality.”

The top priority will be helping stabilize the income of ordinary people, keeping inflation in check and creating jobs, Lee said.

Facility investments by businesses also expanded 9.9 percent over the same period thanks to increased spending on machinery and transportation equipment.

Exports jumped 11.8 percent in January from a year earlier leading to a trade surplus of $870 million, the report said.