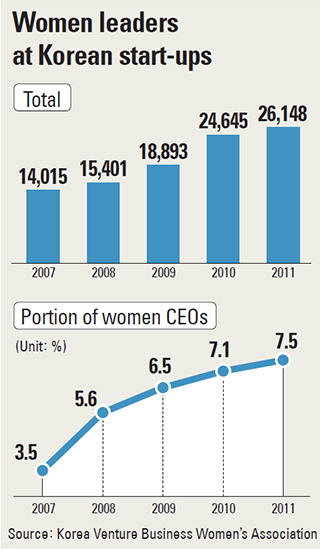 Competition among electronics companies is based not only on technology but also the designs of products and their marketing, areas that women employees can be particularly skillful, a local institute said.

The Korea Institute for Industrial Economics and Trade (KIET) said in a report yesterday that educating women about entrepreneurship is essential to Korea as its ranking of women starting their own businesses is the lowest among major OECD countries.

“Such a lack of interest in entrepreneurship comes from a lack of types of education given in college or when young,” said Yang Hyun-bung, a research fellow at KIET.

That’s one of the reasons there are so few women in the tech industry, Yang said.

Especially among start-ups, which are usually technology- or knowledge-intensive, only 7.5 percent were run by women in 2011, according to the Korea Venture Business Women’s Association.

Yang said that women’s contribution to business could be crucial.

“When you look at recent commercials for IT products or other manufactured goods, many focus on how the products affect consumers’ emotions,” said Yang. “And I believe women can contribute in that realm better than men.”

He also said entrepreneurship among women could help them come back to work after raising children.

“To bring women in their 40s back to the workplace is another goal we can achieve by spreading the word about entrepreneurship,” said Yang.

Since the government first enacted a law to support women in business, it has come up with a variety of measures.