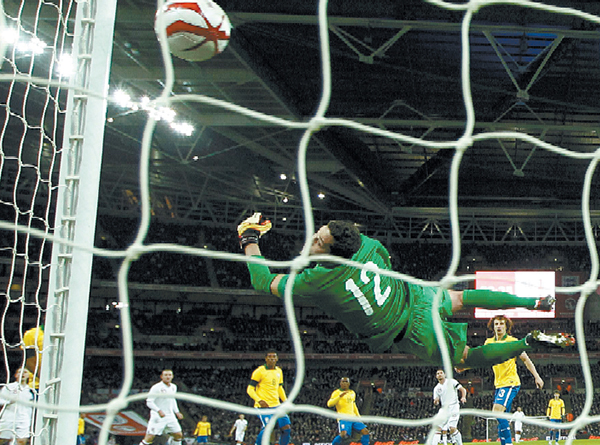 LONDON - Luiz Felipe Scolari and Ronaldinho endured disappointing returns to Brazil’s national team, with England defeating the Selecao for the first time in 23 years, 2-1 in an exhibition game Wednesday night.

Wayne Rooney scored in the 26th minute at Wembley, his fourth goal in his last three games for the English, and Fred tied it in the 48th for the five-time world champions, playing their first game since Scolari replaced Mano Menezes. Frank Lampard curled in a shot off the post in the 60th minute.

“I’m used to losing the first game but after this I’m used to winning games and winning competitions,’’ Scolari said. ‘’I’m not disappointed and I’m not sad.’’

Brazil, which won the 2002 World Cup under Scolari, blew a chance at an early lead when Joe Hart deflected an 18th-minute penalty kick by the 32-year-old Ronaldinho, playing his first game for the national team since October 2011.

Spain, Germany and Argentina all won high-profile exhibitions, while the United States lost 2-1 at Honduras in the opening match of the final round of World Cup qualifying in North and Central America and the Caribbean.

After Clint Dempsey put the U.S. ahead in the 36th minute, Juan Carlos Garcia tied the score with a bicycle kick in the 40th and Jerry Bengtson got the game-winner in the 79th.

In late games, Mexico hosted Jamaica and Costa Rica was at Panama.

Germany came from behind to win 2-1 at France.

Lionel Messi failed to score but played a key role in Argentina’s 3-2 win at Sweden.

A fan wearing a Barcelona shirt ran onto the field late in the game and hugged the four-time FIFA Player of the Year and kissed him on the forehead. The fan was quickly escorted away by security and Messi wiped his face with his shirt before continuing.

Marco Verratti scored in the second minute of second-half stoppage time to give Italy a 1-1 draw at the Netherlands.

Cristiano Ronaldo scored his 38th international goal for Portugal, which lost 3-2 at home to Ecuador.

At the African Cup of Nations in South Africa, Nigeria closed in on its first title since 1994, advancing to Sunday’s final against a surprising Burkina Faso team. AP