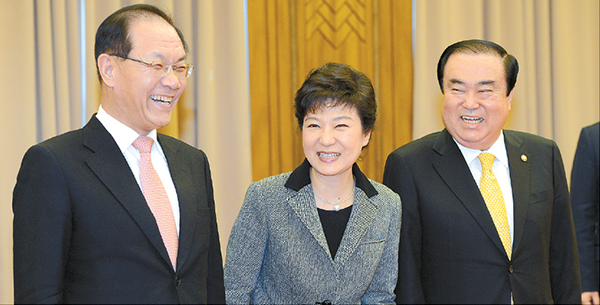 President-elect Park Geun-hye and leaders of the ruling and opposition parties yesterday issued a stern warning to North Korea to immediately cease any efforts to conduct a nuclear test.

The consultation, which began at the National Assembly at 2 p.m., was Park’s first meeting with the opposition leader since her presidential victory.

“If North Korea makes a wrong choice this time, it will deter the new government’s trust-building process between the two Koreas and efforts to achieve peace,” Park said at the beginning of the meeting. “The North will gain nothing from its nuclear program.”

“The president-elect and the heads of the ruling and opposition parties made clear that a nuclear-armed North Korea won’t be tolerated under any circumstance,” a statement issued after the meeting said.

After the meeting, three spokesmen of Park, Hwang and Moon addressed the press.

The three leaders also urged the North to recommit to denuclearization.

“We want to stress that the North must demonstrate its authentic will to cooperate through action, and that will be a starting point to seek a sustainable peace on the peninsula and improve inter-Korea relations.”

They also urged the Lee Myung-bak administration and the military to maintain vigilance to ease the people’s worries during the sensitive time of a presidential transition.

“We must not allow the North to be misled any further that its bad decisions and behavior will be rewarded,” Park was quoted as saying at the meeting by her spokesman Park Sun-kyu. “There cannot be a partisan difference over national security issues. I believe this meeting will contribute to relieving the people’s concerns.”

According to DUP spokesman Jung Sung-ho, Moon talked about the liberals’ view on the security crisis on the peninsula. Moon served as Roh Moo-hyun’s first presidential chief of staff from February 2003 until May 2004. He also headed Roh’s Uri Party in 2005.

“We kept two principles in inter-Korean relations: humanitarian aides would continue and civilian exchanges would be allowed,” Moon was quoted as saying. “For the nuclear crisis, we were clear that a nuclear-armed North Korea won’t be allowed. It was our principle that a peaceful resolution must be found through dialogue, and South Korea should take the initiative in the dialogue.”

According to Jung, Moon showed strong faith in Park’s ability to improve the inter-Korean relations.

Although the meeting was called to discuss the expected nuclear test, the president-elect and the leaders of the ruling and opposition parties discussed other cooperative efforts as well. They agreed to operate a bipartisan consultative body to have serious discussions on state affairs.

“The three leaders reaffirmed that they are partners in state affairs,” the statement said. “They agreed on unconditional cooperation for urgent matters that are closely linked to the people’s lives.”

It remains to be seen if the trilateral meeting will become an established practice. During her presidential campaign, Park proposed a consultative conference by inviting the opposition leaders to discuss state affairs. She said the conference could start discussions even during the transition period.

Asked if yesterday’s meeting was the starting point to follow through with that plan, aides close to the three leaders said more working-level discussions were needed to make a decision. Floor leaders of the ruling and opposition parties would work on the issue, they said.

“This is the first meeting of the president-elect and the ruling and opposition leaders,” said a Park aide. “The meeting itself is important because it shows that the leaders can sit down for a consultation whenever an important issue arises in the future.”

They also agreed to bipartisan efforts to follow through with overlapping campaign pledges by Park and the defeated DUP candidate Moon Jae-in.


The DUP’s interim leader also advised Park to communicate with the people for the success of her government.

“Moon told her not to forget the 48 percent of the people [who did not vote for her],” Jung said. “And Moon also advised Park to create a timetable for her first 100 days and boldly push forward her key projects because the first year in a presidency is crucial.”

“The president-elect spoke briefly about her plan for government restructuring and sought the legislature’s understanding,” he said.