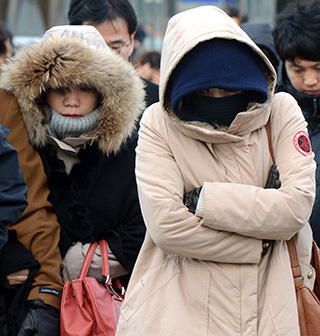 Commuters try to maintain some warmth yesterday morning at Gwanghwamun Square, central Seoul, as the temperature dropped to minus 12.8 degrees Celsius (8.9 Fahrenheit). It will be colder today, the weather agency forecast. [NEWSIS]

Monday was supposed to be the first day of spring, or ipchun, according to the traditional Korean calendar.

But the cold spell that has gripped the country this winter shows no signs of yielding soon.

The Korea Meteorological Administration forecast yesterday the temperature in Seoul will drop as low as minus 17 degrees Celsius (1.4 degrees Fahrenheit) this morning, which would surpass the previous low for the year of minus 16.4 degrees Celsius on Jan. 4. Last year, the coldest day of the winter was also in February, not January, when it hit minus 17.1 degrees Celsius on Feb. 2.

The cause, according to meteorologists, is “sudden stratospheric warming phenomenon.” It’s a complicated weather phenomenon that has been known for a while, but seems to be increasing in frequency worldwide. A warming in the stratosphere, or the upper atmosphere, pushes polar vortexes south leading to cold spells.

“The reverse of the polar vortex causes the polar jet stream in the stratosphere to change its direction as well,” said Kim Hyun-kyung, meteorologist at the state-run weather forecaster.

The weather forecaster explained that the jet stream works as a buffer to keep cold air in the North Pole from descending on Korea. When it is weakened or reverses direction, cold air reaches the peninsula.

Kim Baek-min, a senior researcher at the Institute of Ocean Science and Technology, told the JoongAng Ilbo that the cold wave “could continue well into mid-February” as “the increased temperatures in the stratosphere tends to stay long.”

The weather administration predicted yesterday the country will not have snow or rain until Lunar New Year’s Day, which falls on Sunday, when the Seoul, Gangwon and Chungcheong regions are expected to have light snow early in the day.