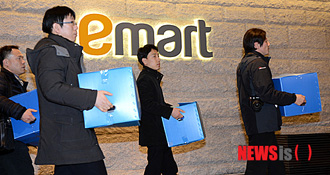 The Ministry of Employment and Labor raided the headquarters and several branch stores of E-Mart, the county’s largest discount store chain, on charges of illegal surveillance on the corporation’s workers to prevent them from joining or forming a union, in cooperation with prosecutors.

About 150 investigators and special judicial police from the Seoul Central District Prosecutors’ Office and the Labor Ministry raided the E-Mart’s headquarters office in Seongsu-dong, central Seoul, and six branches - East Gwangju, Gumi in North Gyeongsang, Bucheon and Suji in Gyeonggi, Sindorim in western Seoul, and East Incheon - from 9:20 a.m. yesterday.

On Jan. 30, the countermeasure committee, which was formed by six civic groups, including the Korean Confederation of Trade Unions and People’s Solidarity for Participatory Democracy to normalize E-Mart, accused 19 high-ranking officials of Shinsegae Group, the mother company of E-Mart, including its Vice Chairman Chung Yong-jin to the Labor Ministry and the prosecution.

They said that E-Mart systematically prevented its workers from joining or forming a labor union and has been illegally monitoring the lives of the union members.

There is speculation that the company has illegally used workers’ resident registration numbers to check if they have joined the union and also has fired some workers who led the organization of the union.

Prior to the accusation, the Labor Ministry conducted a special labor inspection by sending its 10 officials to 24 branch stores nationwide from Jan. 17 to Jan. 25 to see whether the corporation has violated the country’s labor standards after they obtained intelligence about the union-breaking suspicion.

The Labor Ministry said yesterday they have extended the special labor inspection on the giant retail chain to Feb. 15 for a more thorough investigation.

“If the allegations are proven that the corporation has intentionally interfered with union activities, the officials who ordered this are subject to up to two years in prison and a 20 million won [$18,360] fine,” said Kwon Hyeok-tae, director of the Labor Management Division from the Labor Ministry.

They also raided offices of the Hanlim Law firm and Bridge Consulting, labor management consulting law firms that are suspected of providing legal advice that helped prevent E-Mart workers from joining a union.

Prosecutors and the Labor Ministry are also trying to find 25 officials of the Labor Ministry who are suspected of covering up the corporation’s violations in return for receiving gifts on Chuseok (Korean harvest) and Lunar New Year’s holidays for years.

“We will make a thorough investigation about the issue because interfering with union activity is a clear violation of the country’s labor laws,” the spokesman of the Labor Ministry said.