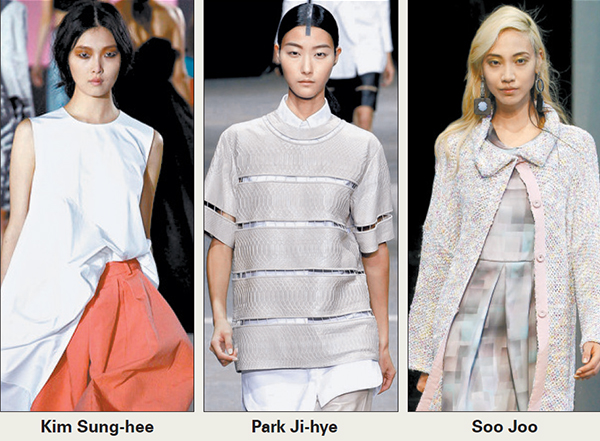 New York Magazine, a weekly magazine covering culture and the arts, on Wednesday introduced 10 rookie models to watch for in this week-long fashion event. They include three Koreans: Kim Sung-hee, 26; Park Ji-hye, 25; and Soo Joo, 23.

The 10 models were selected by the magazine after taking counsel from industry directors and designers that scout models as well as from modeling agencies.

Among the 10 are also two Russians, one each from Belgium, the United States, Angola, France and the Netherlands.

New York Fashion Week is one of the world’s four largest fashion events along with Paris, London and Milan.

The magazine described Kim as “the first-ever Asian face of Prada.” She stepped into the spotlight in the fashion industry when she caught the eye of Miuccia Prada, the designer of the luxury Prada and Miu Miu brands.

Kim was shot in a collection book for Miu Miu 2013 by leading fashion photographer Steven Meisel, side by side other worldwide models.

New York Magazine described her as being a suitable model for designer Alexander Wang.

Park was selected to walk the 2013 runway for Chanel and Christian Dior. Model casting director James Scully pointed to her as the model that will shine in Vogue magazine this year.

Soo was also introduced by the magazine as being under the radar of the New York fashion industry since she made her debut two years ago.

Along with the three rookies, five prominent Korean designers will introduce their work as part of a “Concept Korea” presentation at the opening show of the fashion week on Thursday at The Stage at Lincoln Center.

It is the seventh season of the Concept Korea show, organized by Seoul’s Ministry of Culture, Sports and Tourism, the Korea Creative Contents Agency, Daegu Metropolitan City and the Korea Research Institute for Fashion Industry.

Designers will showcase their works on the runway with a combination of fusion Korean traditional music.