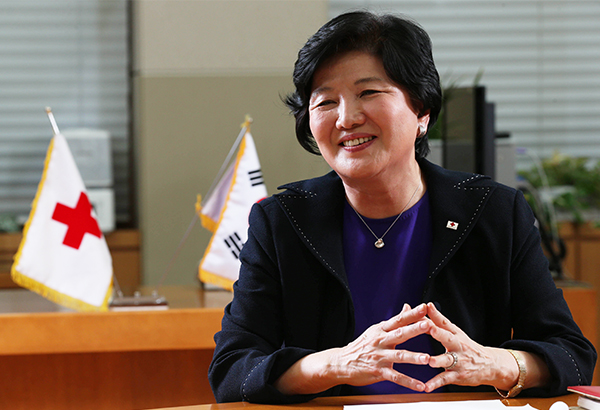 Korean National Red Cross President Yu Jung-keun, the first female to lead the relief organization, poses while sharing her hopes of having more young people in Korea volunteer with support from her organization. By Ahn Seong-sik


“How about celebrating Volunteer Day instead of Valentine’s Day this year?” proposed Yu Jung-keun, president of the Korean National Red Cross (KNRC).

In an interview with the JoongAng Ilbo at her office in Namsan-dong in central Seoul, last week, Yu, 68, said she has put together “a special program that elevates [the significance of this year’s] Valentine’s Day on Feb. 14 by having young couples celebrate Volunteer Day.”

The program, according to Yu, will involve couples baking bread together at 13 selected volunteer centers run by the KNRC nationwide and delivering them to their neighbors in need.

“Love between couples will be more significant [on Valentine’s Day] if they feel the joy of volunteering while dating at the same time,” she said.

Yu is the first female president of the KNRC in its 108 years of history. The relief organization was founded in 1905 by Emperor Gojong, two years after Korea signed the Geneva Conventions.

With Yu at the helm as the 27th president, there have been many changes within the organization.

In the past the image has been considered as serious and formal. Now, the image of the KNRC has become more cheerful and light-hearted.

Last year, the KNRC employees donated blood instead of holding a formal year-end ceremony and this year, instead of organizing a kick-off meeting, employees, including Yu, headed to Seoul Station in central Seoul and served tteokguk (rice cake soup) and scarves to homeless people. Her motto as president is to have KNRC reach out to the Korean people.

“With the Volunteer Day event, I plan to build up the 50 KNRC volunteer centers nationwide to a place where young people share and serve,” Yu said.

She also renamed the volunteer center from the previous Community Welfare Center of Red Cross to Hope and Sharing Center and replaced the signboard with one showcasing a more modern design.

“I wanted to have people - anyone - volunteer entertainingly and easily,” Yu said. “I also plan to utilize the centers to where young people and lawmakers spend time together [and share ideas], and elementary school students volunteer.”

As a female president, Yu said that a female leader is given the strength and ability to create unity in the workplace by breaking down the walls.

Yu joined the KNRC in 1998 when she volunteered for the Red Cross Special Advisory Committee for Woman’s Volunteer Service. Before being appointed as president in late 2011, Yu served as vice president of the relief organization. She also has other leadership experiences.

When she was attending Ewha Womans University, studying English language and literature, Yu was the president of the student body. She was also chosen as the university’s May Queen at an event celebrating the school’s 50th founding anniversary. Yu also graduated as a top student.

“I really love the spirit of the KNRC, which is love and volunteer,” Yu said. “Sharing and volunteering is not to please others but they help vitalize each of our own lives and bring growth.”

The organization has been promoting its “Hope Windmill” project that aims to improve the living quality of society’s four major vulnerable groups, including children and elderly in the lower-income brackets, North Korean refugees and multi-ethnic families.

“We connect two volunteers and one family belonging to the [vulnerable] group and provide them with necessities and services,” Yu said. “Currently, we provide support to around 20,000 households and we plan to expand this number to 22,650 households by this year.”

Yu said that with support from Hyundai Motor Chung Mong-koo Foundation, 50 percent of foreign workers’ medical fees are covered. In the four months after the center opened, around 2,000 foreign workers received medical treatments.

“In December, last year, we opened our second Hope Medical Center at the Red Cross Hospital in Incheon,” she said. “This center is dedicated to disabled people and North Korean refugees.”

The president said that there will be more centers opening at its hospitals in Sangju, Geochang and Tongyeong.

“The difference between KNRC and non-governmental organizations is that the latter group provides aid to mainly overseas children,” Yu said. “The KNRC, however, focuses on offering help to those isolated groups within the Korean society.”