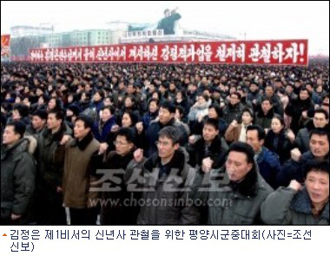 A mouthpiece of North Korea said there is still a “high possibility for an inter-Korean dialogue” in the midst of escalating tensions on the Korean Peninsula over the regime’s plan to hold a third nuclear weapons test.

The Choson Sinbo, the pro-North newspaper based in Japan, made the assertion yesterday in an editorial.

“The DPRK [North Korea’s official name] concluded that the U.S. government’s hostile policies [against North Korea] reached its peak with the adoption of the new [United Nations Security Council] resolution, and declared an end to any denuclearization talks,” the editorial said.

“However, there is still a high possibility of opening a door for a dialogue, if the Southern government tries to resolve the problem on the basis of common interests between the two Koreas.”

On Jan. 25, the Committee for the Peaceful Reunification of the Fatherland, a propaganda mouthpiece of the regime, warned that “there will no longer be denuclearization talks between North and South Korea” and threatened Seoul with “physical countermeasures” if it took part in the new sanctions.

“The Park Geun-hye administration will start on Feb. 25,” the editorial in Japan said. “In this situation, a result of the UNSC sanctions, the upcoming actions of the new [South Korean] government will become a litmus test to launch ‘trust-based processes’ in order to normalize inter-Korean relations.”

The editorial urged the South to consider talks.

“There are reasons why South Korea should accept a dialogue about peace and stability on the Korean Peninsula,” it said. “At the inter-Korean summit in 2007, there was an agreement to strive for a declaration to end the war through a three- or four-party negotiation.”

At the 2007 inter-Korean summit between former leaders Kim Jong-il and Roh Moo-hyun, the two men agreed on the need to terminate the decades-long cease-fire that followed the 1950-53 Korean War and replace the armistice agreement with a peace treaty.