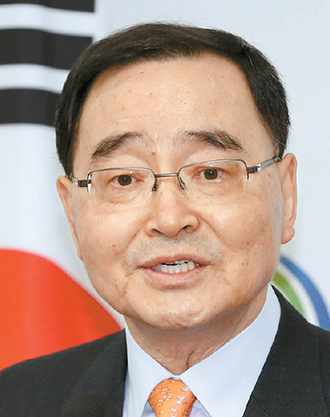 The announcements came as Park faced growing concerns that she may not have enough time to build her cabinet and the presidential secretariat with her inauguration coming on Feb. 25. Representative Chin Young, deputy head of Park’s transition team, held a press conference, broadcast live nationwide, yesterday morning to make the nominations public.

“The president-elect decided to nominate Jung as the prime minister because of the people’s deep trust in him as a public servant, his experience in innovative administration and various contributions to society,” Chin said.

“While serving 30 years as a prosecutor, Jung has earned the respect of the legal community with his firm belief in serving the country, strict integrity and amicable character.”

Jung, 68, is a former veteran prosecutor who earned his reputation by handling major corruption cases in the 1980s and 90s.

Last year, he made his debut in the political arena as Park named him to oversee the nomination process of the Saenuri Party in the April legislative elections.

With strong reform efforts, the ruling party managed to score an election comeback.

After the media uncovered allegations involving his sons’ military dodges and family assets, Kim gave up the nomination on Jan. 29.

“I am not a person with a fancy career,” Jung said after the nomination was announced. “I see myself as an ordinary person. I think Park appointed someone like me to this important post to show her intention to recognize ordinary people.”

Asked if he is confident to face grilling by the lawmakers and media, Jung said it won’t be appropriate for him to say. He, however, said he went through days of vetting by Park’s team.

He has one son, who is currently working as a prosecutor. The son was exempted from military service due to a spinal disc hernia.

The National Assembly will have a confirmation hearing on Jung in the coming weeks before Park’s inauguration on Feb. 25. A voting session is scheduled to confirm the motion on the prime minister appointment on Feb. 26.

Reflecting the heavy mood ahead of the confirmation hearing, the press conference was low-key as Park didn’t host it personally. The mood was clearly different from her first grand press conference on Jan. 24 to reveal her initial choice for prime minister. 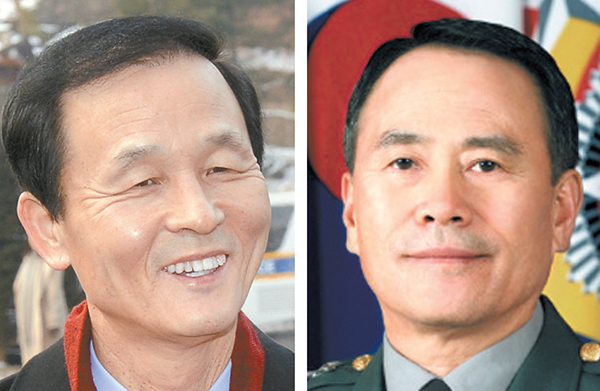 
After the Lunar New Year holidays, Park is scheduled to make public her minister nominees and aides in her Blue House secretariat, including the presidential chief of staff.

The appointments made yesterday once again show Park’s practice of using people she had previously worked with. Jung assisted Park in the legislative nomination process for the Saenuri Party before the April election last year, while Kim Jang-soo and Park Heung-ryul supported her in her presidential campaign.

A native of Hadong, South Gyeongsang, Jung studied law at Sungkyunkwan University and passed the bar exam in 1972, beginning his career as a prosecutor at the Yeongdeungpo branch of the Seoul District Prosecutors Office in 1974.

He left the prosecution in 2004 to become a lawyer. From 2004 to 2006, he was a standing member of the National Election Commission, a minister-level post. From 2008 to 2011, he worked as head of the Korea Legal Aid Corporation. Since 2006, he has worked as a senior advisor to the law firm Logos.

It was clear that passing the confirmation process smoothly was one of the key conditions. It also shows that Park was sticking with her principle of “rule of law” for her prime minister candidate as she chose another law professional.

Park also made public two appointments in the key posts in her Blue House. While the cabinet members are required to undergo confirmation hearings at the National Assembly, presidential aides are free from the process.

Kim, a 64-year-old former defense minister, will serve as the head of the national security office in the Park Blue House, a powerful position to be created under Park’s campaign promises to make national security a top priority.

A native of Gwangju, Kim served in various key posts in the military after graduating from the Korea Military Academy in 1971. He served as minister of national defense for President Roh Moo-hyun from 2006 to 2008 and accompanied Roh to Pyongyang in 2007 during the inter-Korean summit.

After his retirement, he joined the Saenuri Party and served as a proportional representative from 2008 till last year. He was Park’s main security advisor throughout her presidential campaign.

He reportedly urged Park to issue the last-minute pledge to cut mandatory military service from 21 to 18 months on the eve of the election. He is currently working as a member of Park’s transition team to oversee defense affairs.

Park Heung-ryul, who served as the Army chief of staff from 2006 to 2008, will head the presidential security service of the Park Blue House. She already unveiled the plan to upgrade the post, currently at the vice-minister-level, to the minister-level.

The 63-year-old former general is known to be close to Kim and worked as a strategist in security affairs in the Park presidential campaign at the request of Kim. He is a native of Busan and graduated from the Korea Military Academy in 1972.

The main opposition Democratic United Party also said yesterday that it respects Park’s decision and it will thoroughly vet Jung for the position.

The DUP, however, complained that Park made public the nomination on the eve of the Lunar New Year holidays.

“We wonder if that is an attempt to dodge media scrutiny as much as possible,” said Representative Kim Hyun, spokeswoman of the DUP.