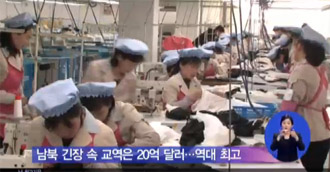 The volume of trade between the two Koreas reached US$1.97 billion in 2012, inching up from the previous record of $1.91 billion in 2010, according to the data by the Korea Customs Service.

South Korean products worth $896.26 million were shipped to North Korea, up 13.4 percent from the previous year.

The amount of products that came here from the North jumped 19.3 percent on-year to $1.07 billion, according to the data.

A total of 99 percent of the volume was shipped through a land route linked to the inter-Korean industrial complex in the North's border town of Kaesong.

The complex, a key outcome of the inter-Korean summit in 2000, marries South Korean capital and technology with cheap labor from the North.

The data comes amid growing regional tension over the North's threatened nuclear test in retaliation for a U.N. Security Council resolution that punished Pyongyang for its December rocket launch.