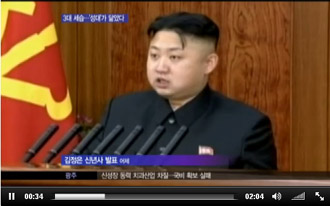 North Korea's planned important measures may not refer to a third nuclear test, a state propaganda outlet has suggested, adding to the confusion over Pyongyang's nuclear ambitions.

"The U.S. and hostile forces jumped to conclusions that the republic is planning the third nuclear test, citing their hypothesis and argument," the propaganda weekly Tongil Sinbo said Friday in an article posted on a Web site operated by the North.

The weekly said the U.S. and other countries know little about what important state measures North Korea will take and whether the measures involve a nuclear test or anything worse.

Last month, the U.N. Security Council toughened sanctions on the North for carrying out a long-range rocket launch in December in violation of U.N. resolutions.

The North has claimed the launch was intended to put a satellite into orbit, but South Korea and the U.S. denounced it as a disguised test of missile technology.

The North's powerful National Defense Commission also said in late January that "a nuclear test of higher level which will be carried out by" the North will target the U.S.

The comments fueled speculation that the North could conduct another nuclear test.

South Korean officials have said North Korea has completed all preparations and could detonate a nuclear device at any time.

North Korea carried out its first and second nuclear tests in 2006 and 2009. Each time, the test came weeks after the U.N. Security Council adopted a resolution and condemned Pyongyang for a long-range rocket launch.

Still, the weekly said the North's planned important state measures "are aimed at safeguarding its national interest, not at threatening anyone."

"It remains to be seen what the important state measures are, though it is clear that any U.S. reactions to them may prove to be only irrevocable losses," the weekly said.