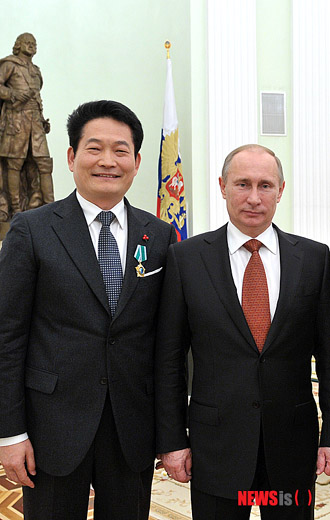 Russia is putting pressure on North Korea to abandon its nuclear test plan that threatens global peace, according to officials of South Korea's Incheon city on an official visit to Russia.

"Russia is exerting its utmost efforts to dissuade North Korea from conducting a nuclear test," an Incheon city official quoted Putin as saying during a 30-minute meeting with the South Korean mayor.

Song began a five-day visit to Russia on Wednesday at the invitation of Putin who recognized the South Korean port city's efforts to promote friendship between the two countries. During the meeting with Song, Putin conferred a meritorious medal on him.

According to Incheon city officials, Song asked Putin to play a go-between in the North Korean nuclear standoff by proposing a peace treaty or a non-aggression pact between Washington and Pyongyang.

Putin concurred with song's view, calling it a "good idea," Incheon city officials said, adding that the Russian President also stressed the importance of dialogue between South and North Korea.

In a verbal message sent through the mayor to South Korean President-elect Park Geun-hye, Putin also hoped for progress in Russia's proposal to pipe Russian natural gas to South Korea through North Korea, the officials said.

Those projects, supported by South Korea, have been in limbo due to inter-Korean tensions. South Korea believes that the projects, if pushed through, would help its economy. South Korea is a major consumer of natural gas.