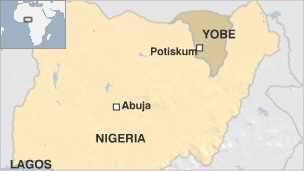 Three doctors murdered in a knife attack in a northeastern town in Nigeria originally thought to be South Koreans were of North Korean nationality, said South Korean officials on Sunday quoting remarks by police in the African country.

Earlier, foreign media reports said that attackers killed three South Korean doctors by slitting their throats and beheading one of the physicians Saturday night in Potiskum, a town in Yobe State that has long been under attack by the radical Islamic sect Boko Haram.

But quoting remarks by police there, an official at the South Korea's embassy in Nigeria said that the slain Asian doctors were actually North Koreans.

AFP originally reported that the killed doctors were Chinese but later said that the slain were of South Korean nationality, quoting remarks by the state police commissioner.

In response to mixed reports on the nationalities of the slain, Seoul's foreign ministry earlier said that there was not a high possibility that the killed would be of South Korean nationality as there are few Koreans living in the Nigerian town.

South Korea's diplomatic office and Korean people living there have not reported such incidents to Seoul's foreign ministry, it added.

"The chance that the slain would be South Koreans is not high," said an official at the foreign ministry. "But we are checking further related situations via diverse channels."