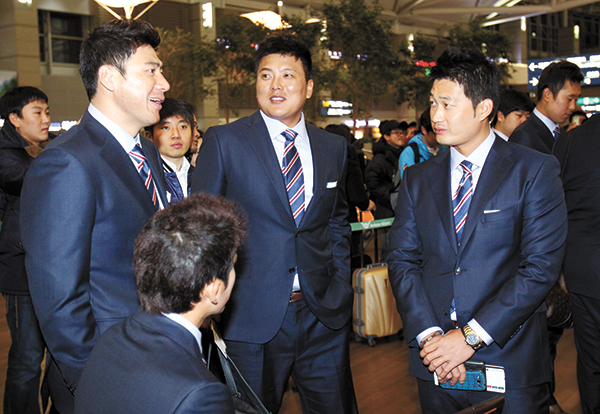 Seo Jae-weong, the only Team Korea member who has played in the U.S. Major League, said yesterday that he would use his experience to the full to lead the team to the semifinals or beyond during the 2013 World Baseball Classic.

Speaking to reporters before leaving for host country Taiwan with his teammates, the veteran pitcher had some advice to offer younger pitchers.

“There’s a restriction on the number of pitches at the WBC, so pitchers who aren’t starters should also be ready to pitch anytime they’re called in,” said the former New York Mets pitcher, referring to a rule aimed at protecting the men on the mound that limits a pitcher to 65 pitches in the first round, 80 in the second round and 95 in the semifinals or finals.

Korea’s pitching resources - 13 of the 28 team members are pitchers - have already been thinned out after several aces pulled out including Ryu Hyun-jin, who said he needs time to adjust to his new team, the LA Dodgers, and Bong Jung-keun, Kim Kwang-hyun and Lee Yong-chan, who are injured. The pitching restriction will likely put pressure on the team to come up with new strategies on the mound.

Seo pitched a total of 178 balls over 14 innings when he started three games at the 2006 WBC, two of which he won.

“They won’t have any regrets if they just concentrate on each pitch,” the 35-year-old pitcher said.

Seo also mentioned the official WBC ball, the slippery feel of which some Korean pitchers are having a tough time adjusting to. The ball, produced by U.S. company Rawlings, has long been used in the Major League and was adopted as the official ball in the two previous WBC events.

Seo said pitchers wouldn’t have to worry about the ball too much.

“It is slippery, but it’ll be pitched with the help of a rosin bag (to improve grip) during the games,” Seo said. “I think it’ll get better if they pitch the ball with sweat on their hands.”

Seo joined the Mets in 1998 after graduating from Inha University in Incheon and had 28 victories and 40 losses with an earned run average of 4.60 in the Major League until 2007. He pitched for the Los Angeles Dodgers and the Tampa Bay Rays between 2006 and 2007.

He made his debut with the Korea Baseball Organization in 2008, but his early struggles with the Kia Tigers kept him from being selected for the national team for the 2009 WBC.

He improved last season, with nine victories and eight losses and an ERA of 2.59, but he had failed to make it to the national team for the latest WBC event. Then he was called in to replace Hong Sang-sam of the Doosan Bears who withdrew due to an injury.

Now he’s the oldest pitcher on the team and the third oldest player. “This is my last chance (to play in the WBC), so I want to lead the younger players well and get at least to the semifinals,” Seo said.

Korea, the runner-up at the 2009 WBC event, begins its pre-event training in Taiwan today. It will take on the Netherlands, Australia and Taiwan in the first group round March 2 to 5.

Seo said they’ll have to watch out for the host team. “The Netherlands is said to be strong, but Taiwan has always tried to catch up with Korea,” he said. “Only when we beat Taiwan will we be able to relax in the second round.”