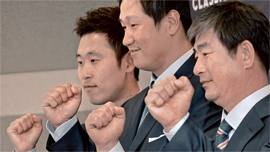 Slugger Lee Dae-ho said yesterday teamwork will remain a strong weapon for Korea during the upcoming World Baseball Classic despite frequent replacement of its players.

Team Korea, led by Ryu Joong-il, gathered yesterday in a Seoul hotel, a day before leaving for training in Taiwan.

The Ryu squad, whose latest WBC campaign starts next month, is seeking more than just a third consecutive semifinal run.

But the withdrawal of many key players, especially pitchers, is casting doubt on the team’s chances for a win. Many have deemed this year’s team the weakest ever assembled for the WBC.

“I know the media and the public are worried about us,” Lee, an infielder from the Orix Buffaloes, said at the press conference yesterday.

“I was picked for the national team several times so far and it has never been so strong,” Lee said. “We had good results only because the players were united to do something great.”

This will be Lee’s second appearance at the WBC after the former Lotte Giants cleanup hitter contributed to Korea’s runner-up finish at the 2009 event with a 0.278 batting average and five RBI.

The 30-year-old player, who had a 0.309 batting average over his 11-year stint with the Korea Baseball Organization, also helped Korea win gold medals during the 2008 Beijing Olympics and the 2010 Guangzhou Asian Games.

“We will train hard and return with the result that we want,” Lee said.

Korea will start a two-week training session in Taiwan tomorrow and will play several buildup games beginning with the NC Dinos on Feb. 19.

The preliminary 28-member roster for Korea changed seven times since the initial announcement on Nov. 12, starting with Bong Jung-keun of the LG Twins on Nov. 30. The former Atlanta Braves player, who had two wins for Korea during the 2009 WBC, sustained a shoulder injury and was replaced by Jang Won-jun.

Several other key pitchers pulled out such as Ryu Hyun-jin, who signed the Los Angeles Dodgers in December. Kim Kwang-hyun of the SK Wyverns, Hong Sang-sam of the Doosan Bears and Kim Jin-woo of the Kia Tigers also withdrew, citing injuries or rehabilitation. Lee Yong-chan, who was recruited in place of his Doosan teammate Hong, was again replaced by Song Seung-jun of the Lotte Giants due to injury.

Among the position players, Major Leaguer Choo Shin-soo passed on a second WBC appearance, saying he needed time to adjust to his new team, the Cincinnati Reds. Son A-seop of the Giants took his place.

“Lee Seung-yeop [of the Lions], Kim Tae-kyun [of the Hanwha Eagles] and Lee Dae-ho all have WBC experience,” Ryu said. “If they lead well at bat, we will be able to have a good result.”

Ryu picked Japan and Cuba as teams that present challenges for Korea and said that he will focus on improving defense.

Korea lost to Japan 5-3 in the 2009 final, and in 2006, Japan shut out Korea 6-0 in the semifinals en route to beating Cuba 10-6 in the final. Overall, Korea exchanged four wins and four losses with Japan during the two previous WBC events.