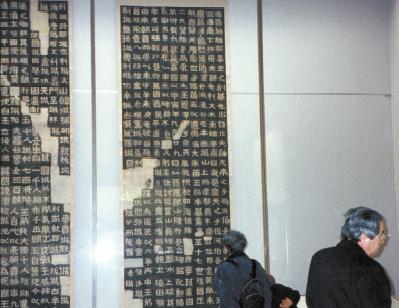 A copy of the Stele of King Gwanggaeto inscriptions is displayed at the Tokyo National Museum in 2004. [JoongAng Ilbo]


A long-standing historical dispute between Korea and Japan has again exploded in academia with the recent discovery of what is believed to be a Goguryeo-era stele (a stone slab with an inscribed surface) in Jian, China.

The first such find, known as the Stele of King Gwanggaeto, was found in the 19th century, also in Jian. That may seem like a long time ago, but what is allegedly inscribed into the stone is still the source of much scholarly bile between Korea and Japan.

Some say if the recently discovered stele is indeed from the Guguryeo Kingdom (37 BC to 668) and is indeed, as some historians suggest, a miniature of the Stele of King Gwanggaeto, it may help to clear up a disagreement that’s over a century old.

The Stele of King Gwanggaeto was discovered by a Japanese historian in 1883, when Japan was mulling a takeover of Korea. (Japanese colonization officially began in 1910.)

Japanese scholars took several years to decipher the inscriptions on the stele. Then, they came back with the bombshell that part of the stone backs up the theory that the Imna Japanese Headquarters was set up in the fourth century in the Korean Peninsula’s south (in areas like today’s Suncheon, Gwangyang and Yeosu) and ruled ancient Korean dynasties such as Baekje, Silla and Gaya through the sixth century.

Just like the highly controversial Northeast Project of China, this theory is strongly denounced by Koreans, particularly because Japanese authorities used it to justify its colonization between 1910 and 1945, and even included it in their history textbooks.

According to the Northeast Asian History Foundation - which was set up in 2006 to resolve historical disputes in the region, it was Kim Seok-hyeong (1915-1996), a prominent North Korean historian, who first refuted the theory in the 1960s with his book on early relations between Korea and Japan.

Others, like Lee Jin-hee, a Korean historian residing in Japan, also refute the theory. Lee even suggested in a 1972 dissertation about the stone that the inscriptions might have been manipulated by Japan to back up the Imna theory.

According to Korean researchers, archaeological discoveries in the South Jeolla region since the 1980s also go against the theory. Last year, the third round of excavations on a sixth century tomb complex in Suncheon found over 200 relics from Gaya (the confederacy of territories in southern Korea between the first and sixth centuries).

“If Japan indeed ruled Gaya, we should’ve found Japanese relics,” said Park Cheon-su, an archaeology and anthropology professor at Kyungpook National University. “The fact that we found no Japanese relics is proof that the theory may have flaws.”