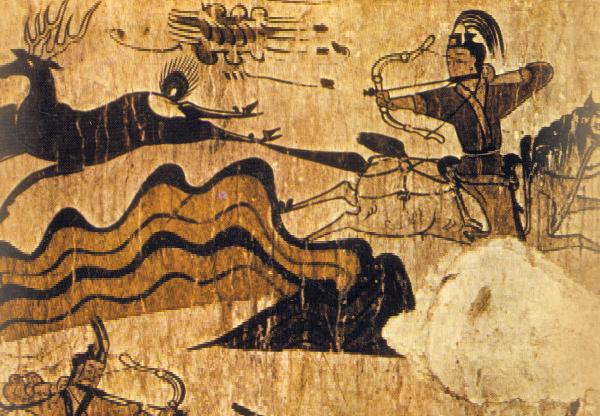 The recent discovery of a stone monument from Korea’s ancient Goguryeo Dynasty (37 BC to 668) in Jian, China, has caused quite a stir among Korean academics.

With the Chinese government tight-lipped as it works to study and preserve the stele, presumed to be about 1,600 years old, historians in Korea are struggling for answers.

While academics here are doing all they can to gather details about the finding, the only official information available comes from a Chinese government-approved article and set of photos. In particular, experts are eager to learn more about the writing on the stele, believed to be only the third ever recovered.

Out of Korean history’s numerous kingdoms, Goguryeo was particularly valued for its military prowess and brave spirit. It covered a massive piece of territory that included not only today’s North Korea but also southern Manchuria and southeastern Russia.

This sentiment was shared by Kim Il Sung, founder of North Korea. He was known to say that Koreans were at their strongest during Goguryeo.

The discovery is also drawing attention for political reasons. In 2002, China launched the controversial Northeast Project to document history in that region of the country. The initiative has been criticized for assuming that all history that once occurred in present-day China now belongs to the government in Beijing. Koreans have been particular sensitive about the treasured Goguryeo Dynasty.

Given the controversy, Korean scholars have resolved to lay their eyes on the stele, or at least rubbings of its inscriptions, along with their Chinese counterparts.

According to the report, a resident found the stele near a river that runs between Dandong and Jian on July 29 and reported it to the authorities. It was soon examined and determined to be from Goguryeo.

About a week later, Korean media reported on the discovery after the Society for Korean Ancient History, an organization launched in 1987 to study Korea’s ancient kingdoms, found the article in Chinese Cultural Relics News.

“The inscriptions on the stele show a definitive link to the Stele of King Gwanggaeto [also from the Goguryeo era], but there is also a significant portion where interpretation is impossible,” said Yeo Ho-kyu, a history professor at Hankuk University of Foreign Studies. “A close inspection of the stele is necessary.” Yeo is a member of the Society for Korean Ancient History.

The recently discovered Goguryeo stele is 1.73 meters (5.67 feet) in height and made of granite, a common natural resource in the region, according to Chinese Cultural Relics News. It is inscribed with 218 characters on the front written in 10 columns. Only 140 letters are recognizable at the moment.

On Jan. 25, Yonhap News Agency reported that China was keeping its study of the stele under wraps at a Jian museum. The report said Yonhap attempted to learn more about the stele from a local journalist but failed. It also asked Chinese cultural heritage authorities to allow a reporting trip related to the stele, but the request was denied.

A day later, quoting sources in Beijing, a Korean daily reported that the scholars who were involved in China’s Northeast Project were at the forefront of the research on the stele, raising the possibility that the artifact could be used to argue that Goguryeo was part of China.

Based on the characters that are readable, the purpose of the recently found Goguryeo stele must have been for managing and guarding the tombs of royalty and noblemen, according to experts.

Some of the notable content mentions that “The progenitor of Guguryeo King Chumo founded a nation,” “The kingdom prospered and was carried on to the next generations” and “Even the wealthy cannot sell the watchers of the tombs as they wish.” (King Chumo refers to King Dongmyeongseong, founder of Goguryeo.)

Ko Kwang-eui, a senior research fellow at the Northeast Asian History Foundation, visited the area where the stele was found shortly after the Chinese report. He said that a Guguryeo stele with such a purpose has never been found before.

“There are about 3,000 Goguryeo tombs in the area, and between 700 and 800 are along the river where the stele was found, most likely those that belonged to either royalty or noblemen,” he told the Korea JoongAng Daily.

“The Goguryeo people didn’t build tombstones as Korean people do today. So stone monuments from the time were either for commemorating some event or praising someone’s achievement. But we haven’t found a stone monument solely for managing and guarding tombs - until now.”

Only two Goguryeo steles have been found so far, excluding the latest one. The first one to be found was the famous Stele of King Gwanggaeto, also unearthed in Jian in the 19th century. The other is the Chungju Goguryeo Stele (or Jungwon Goguryeo Stele, after the ancient name of Chungju) found in South Korea in the late 1970s.

Both are known to have been erected by King Jangsu (394-491) during his reign to honor his late father, King Gwanggaeto (374-412), who is touted as one of the greatest conquerors in Korean history for expanding the territory of Goguryeo to northeastern China. More precisely, historians believe the Stele of King Gwanggaeto was erected in 414 while the Chungju Goguryeo Stele was installed during the 5th century.

Some Korean historians believe the recently found Goguryeo stele could be the oldest among the three.

The Society for Korean Ancient History said that its scholars believe the stele was erected either in 388 or 418. Because one of the three characters that specify the year of construction is damaged, it’s up for debate.

However, Yeo of Hankuk University of Foreign Studies emphasized that “there is a good possibility that King Gwanggaeto erected the stele on managing tombs based on the laws of his father [King Gogukyang].”

“The content about the management of tombs on the stele is more detailed than that of the Stele of King Gwanggaeto, which makes us assume it was erected in the earlier period,” he said.

“Looking at the big picture and the flow of the history [of Guguryeo], it makes more sense that the recently found Goguryeo stele precedes the Stele of King Gwanggaeto,” Ko said. “It’s likely that the Goguryeo Kingdom first built the stele, which was like a sample or an experiment, and then developed the larger and more important Stele of King Gwanggaeto in subsequent years.”

Adding to speculation, one Korean scholar even suggested the possibility that the stele might be fake.

Moon Seong-jae, a scholar of ancient Chinese language, said the linguistic style from the Stele of King Gwanggaeto is different than that from the latest stele.

“If it’s not fake, China should reveal the stele and allow it to be studied jointly with foreign scholars,” Moon said.

While many refute Moon’s claims, they all see eye-to-eye on the way to dispel suspicions: give access to Korean scholars.

“It’s too early to make any conclusions at this point,” Yeo said. “It’s important to advance studies on Goguryeo stele, and I hope the recently discovered Goguryeo stele can provide a starting point for cooperation between Korea and China.”

Ko also agreed that more detailed studies can only take place when the full inscription is revealed by China.

It’s also important for Korean academics to see the inscription in a broader context and historical framework, he added after visiting the discovery site.

In the meantime, Koreans are continuing to do what they can with the information they have to learn more about their past.

The Society for Korean Ancient History has formed a group of researchers to study the stele.

The Association of Koguryo Balhae will hold a conference on the stele next Friday.

Chang Se-yoon, spokesman for Northeast Asian History Foundation, said the society will make a proposal for joint study of the stele with the Chinese government soon.

Scholars will be eagerly awaiting a response.

* Location of discovery: Near a river in Jian, northeastern China

* Inscription: 218 characters on the front

* Style: Plate-type in which the front and the back are flatly ground

* Purpose: Managing and guarding the tombs of royalty and noblemen of Goguryeo

* The kingdom prospered and was carried on to the next generations