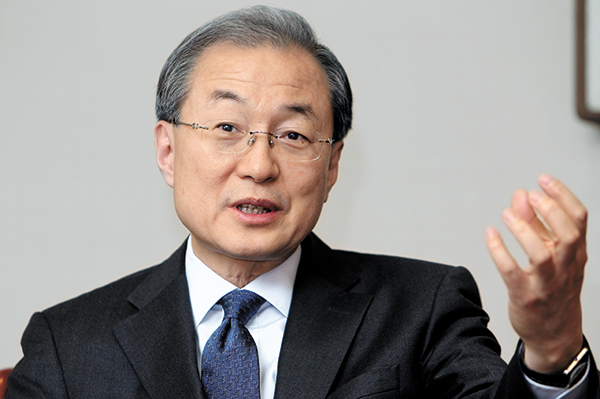 Bark Tae-ho, who is running for the director general (DG) position at the World Trade Organization, feels that it’s time for member countries to rebuild trust and break the 12-year impasse in talks on the Doha Development Agenda (DDA) and put the trade governance body back on track.

“I advocate open dialogue,” the 61-year-old Korean trade minister said in an interview with the Korea JoongAng Daily last week. “We need to go back to basics and start from scratch.”

“Things have become too complicated these days, so let’s be frank and try to find solutions through honest talks,” he added.

If elected, Bark says he will exercise “gentle” and “open” leadership in leading the world’s largest international trade organization.

“I’m an advocate for free trade that creates jobs for all family members across the globe,” the professor-turned-minister said.

Q. How would you approach the DDA issue?

A. The upcoming Ninth Ministerial Conference (MC9) will be an important opportunity for WTO members to put the DDA negotiations back on track. The MC9, slated to take place in Bali in December, is the highest decision-making body of the WTO to deal with the DDA.

Each WTO member agrees on the importance of the MC9. We agree that we need to deliver something this time. That refers to discussion on trade facilitation, issues related to developing countries and agriculture.

The result of the Bali meeting will have three effects. First, we can prove that trade facilitation will help reduce trade costs by 10 percent. This will be helpful to countries suffering from the economic downturn these days.

Second, the WTO would regain confidence in itself if the upcoming meeting shows some tangible results.

Third, the organization will also gain trust from outside after 10 years have passed without any achievements. The DDA issue is so complicated that we can’t resolve it all at once.


What challenges lie ahead for the WTO?

For the past 12 years, the WTO has been stuck on the DDA. It couldn’t catch up with current issues of the world other than trade. Now we need to make an effort to tackle so-called “21st century issues” like poverty and the environment.

One might ask, “What is the relationship between the WTO and global water management?” Water supply is an important issue for farmers. The WTO has to monitor any problems in supply and demand of water, because it pursues free trade in agriculture.

Another challenge of the WTO is lack of attention from businesses. Companies have been indifferent to the organization. Nobody cares about what it does, perhaps because the WTO hasn’t been able to come up with anything. Now it’s time to attract their attention.


What is the role of the WTO’s chief?

The director general of the WTO needs to be an earnest broker. Since the WTO is a member-driven organization, each member has a say in every issue. What the WTO DG needs to do here is to arbitrate among the members based on trust. Trust is the most important thing here. The DG needs to hold as many dialogues as possible with the members. When there’s a complicated problem in which several members with conflicting interests are involved, the DG should be able to talk with each involved member and help them find a solution. If they don’t trust the DG, they won’t tell him frankly what they want. So, the DG needs to have a reputation for being a fair person.

Some say a problem of the current WTO system is that it has too many members. But I think what matters is the absence of leading countries that play a role. The United States, EU and China should be major countries that lead the rest of the WTO members to get involved in talks. The current consensus-based decision-making system needs to be maintained, but not all issues need to be decided by the traditional system. If such major countries exercise leadership, others would follow.

What is your opinion on a possible U.S.-EU free trade agreement?

If the U.S. and the EU sign a free trade deal, it could serve as a double-edged sword. On the positive side, an agreement between the world’s two largest markets could set a new model for regional integration for other regions. It could be helpful in boosting multilateral trade talks. However, on the other side, if the deal benefits the two regions only and discriminates against the rest of the world, it could damage multilateralism. The role of the WTO would be to warn the U.S. and EU to make their bilateral trade deal compatible with multilateral relations.

Although the WTO has some rules on such FTAs, they’re so outdated that they can’t be applied to today’s deals. The WTO, which advocates multilateralism, can’t deny that bilateral or regional FTAs are needed. Regionalism and multilateralism should coexist. If the WTO wants to minimize negative effects from bilateral or regional FTAs, the organization should be functioning again and playing its role.

There are about 300 separate FTAs now. Some say the number has surged because the DDA hasn’t worked out. But at the same time, countries are now recognizing that multilateral relations are also important, as seen in the case of the trilateral FTA talks among Korea, Japan and China, the Trans-Pacific Partnership (TPP) and the Regional Comprehensive Economic Partnership (RCEP). I think the pendulum is swinging from bilateralism back to multilateralism at this moment, which is pretty positive. If such multilateral relations are established, trade will be much easier and more efficient. For example, if 10 countries agree to forge a trade partnership, they will use the same system to identify the rules of origin, which will help them cut costs incurred by different customs systems.


If elected, how would you help developing countries enjoy the benefits of free trade?

There are two principles that the WTO follows in helping developing countries. One is to allow them to open their markets as slowly as they want. The other is to buy more products from such countries. I think the latter is more important than the former. But we should also know that developing countries have many constraints in producing goods on their own.

The incumbent DG of the WTO, Pascal Lamy, has been working hard to provide support for poor countries under the slogan “aid for trade” since 2005. I think now we need to be more specific with the wording. My idea is to concentrate our efforts on helping them improve their capability to produce and supply things. Korea used to have many supply-side constraints in the past, but is a major exporting country now.

As a Korean national, I can share Korea’s lesson with developing countries by demonstrating how the country enjoyed the benefits of trade.