Take paternity leave, blog about it

Take paternity leave, blog about it 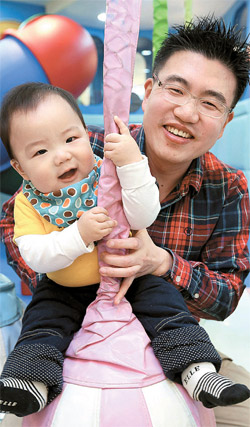 A 36-year-old employee at an IT firm, Kang Jeong-min, now has a new habit: running a blog entirely devoted to raising a baby.

Kang, the father of a 9-month-old daughter, took a year of reduced pay paternity leave on Jan. 1. His wife’s maternity leave came to an end last December.

Since Kang began to look after his daughter, Tae-yeon, the IT company worker has been posting his experiences in raising the child, including price comparisons for different kinds of diapers.

Kang chose to take the as-of-now uncommon paternity leave. He didn’t want a stranger taking care of his daughter.

Kang added he also did not want to ask his elderly parents to do it.

Kang’s wife, Kim Min-gyeong, said she was “at first not very sure” about her husband suspending his work for a year to care for the child.

“But I have noticed my husband tends to be much calmer than me when it comes to handling Tae-yeon, especially when she is crying.”

The number of men applying for paternity leave is on the rise, according to the Ministry of Employment and Labor.

The big change is attributed to a number of policies implemented in recent years aimed at expanding the scope of paid paternity leave among fathers.

Effective Feb. 2, the Ministry of Employment and Labor mandates companies, regardless of their size, to provide at least three days of paid-paternity leave for fathers. Those found in violation will be fined up to 5 million won ($4,589).

Kwon Sung-wok, a 39-year-old civil servant, is one of those fathers joining in a new trend of fatherhood and has one advice for would-be fathers: write a baby book.

Like Kang above, Kwon writes his baby book on a blog, which draws over 1,100 daily visitors.

“When I first visited a cultural center with my 2-year-old daughter, all these mothers asked if I had been laid off,” recalled Kwon. “But now, everyone comes to me for child care information.”

The government has noticed an increased interest among young fathers in raising their children in recent years.

“I have seen many fathers who see raising a child as if it is an extension of their work life, challenging themselves to read a number of books on child care,” said Lee Jae-yong, director of the aging society policy team at the Ministry of Health and Welfare.

“For men, whether it’s quitting smoking or going on a diet, letting others know of their project raises the likelihood of success,” said Kim Dong-hun, who also runs a popular blog on child care, of the need to inform others about their experiences with fatherhood.

Ahn Jong-su, the father of a 3-year-old son who took a two-month paternity leave from October until December in 2011, recalls those two months as “one of the best moments” in his life.

“I highly recommend new fathers to apply for paternity leave regardless of its length.”

“Fathers’ participation in raising a child at an early stage will lead to more involvement by fathers later on,” said Lee Ki-suk, professor of child care education at Ewha Womans University.