Park will get his medal after Dokdo sign scandal

Park will get his medal after Dokdo sign scandal 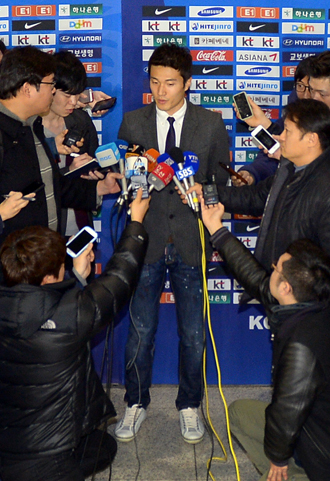 Footballer Park Jong-woo talks to reporters at Incheon International Airport yesterday after arriving from Switzerland, where he learned he would indeed receive the bronze medal that had been withheld from him. [NEWSIS]

Park Jong-woo said yesterday that he has learned his lesson since an act on the pitch during the London Olympics put the Korean footballer at the center of a chronic territorial dispute between his country and Japan.

“It got protracted, but I think it has been a time of development for me,” Park told a media briefing upon returning from Lausanne, Switzerland.

On Tuesday, he heard a decision by the International Olympic Committee executive board that he would indeed be awarded the bronze medal that he had been withheld from receiving.

Park said he got the good result after giving earnest answers during an IOC disciplinary hearing a day earlier.

“Me taking a medal back [to Korea] would feel like my teammates getting the medal on the podium during the London Olympics,” he said.

The 23-year-old midfielder was banned from attending the medal ceremony after he held up a banner that said “Dokdo is our land” in Korean after Korea downed Japan 2-0 in the bronze medal decider on Aug. 10 at the London Games.

The Korean-controlled Dokdo islets are also claimed by Japan. The IOC had withheld him from getting the medal based on the IOC protocol that prohibits footballers from making political acts on the pitch.

Officials of the Korea Football Association had defended Park, saying that he didn’t plan to create controversy, but only held up the sign in the heat of victory after a fan handed it to him.

The IOC agreed that Park didn’t seem to have intended to create such a stir, citing his attempts to console Yuki Otsu, a Japanese midfielder who was sitting on the pitch mourning the loss after the game.

“Otsu Yuki was grieving a lot after the match. I thought if I were in his position, it would have been really tough for me, so I consoled him,” Park said.

The IOC did, however, issue Park a strong warning, ordering the Korean Olympic Committee to come up with measures to prevent similar things from happening in the future.

The KOC was also ordered to deliver the bronze medal to Park “without any ceremony,” apparently concerned about it being another trigger for political conflict between the two countries.

The IOC decision came two months after FIFA penalized him with a two-game ban and a fine.

With the decision, Park also gets exempted from his compulsory military service, a perk given to male Korean athletes who earn any medal at the Olympics.