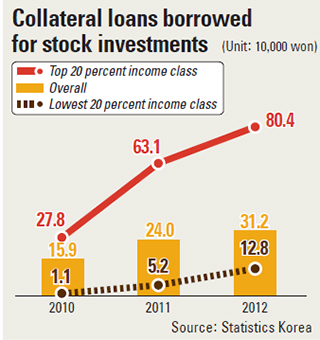 Market watchers said the surge came as income in Korea has remained stagnant after the 2008 global financial crisis.

The average value of loans for stock investment soared at a steeper pace among the low-income bracket, which came in at 189,000 won last year, compared to 11,000 won tallied in 2010, the data showed.

Market watchers said local households should be provided with adequate financial education on the financial market, as the rally of debt-ridden stock investment may result in speculative movement on the stock market.