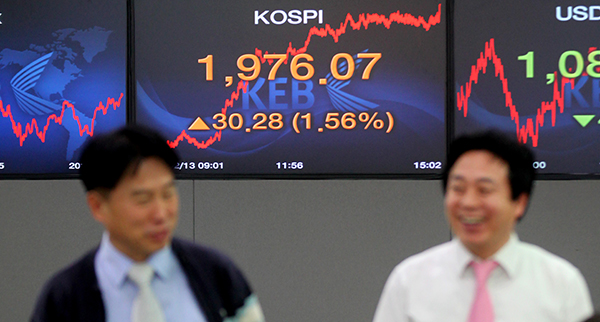 A signboard at Korea Exchange Bank in central Seoul shows the Kospi closed at 1,976.07 yesterday, up 30.28 points (1.56%) from Tuesday. Analysts said the local stock market saw a limited impact from North Korea’s third nuclear test around noon on Tuesday. [YONHAP]


The South Korean stock market remained stable a day after North Korea’s nuclear test, but the government will take measures to prevent possible fluctuations, according to the vice finance minister.

The meeting of representatives of the Ministry of Strategy and Finance, central bank and the financial watchdog was convened to devise measures to prevent market instability. The Kospi closed at 1,976.07 yesterday, up 30.28 points from the Tuesday close of 1,945.79, 5.11 points lower than Friday. The local currency depreciated to 1,086.80 won against the U.S. dollar, down four won from Tuesday’s close. Dealers said investors remained wary of possible United Nations Security Council measures against North Korea.

The country’s credit default swap (CDS) premium also declined 1 basis point to 68 basis points, according to the finance ministry. The figure is 6 basis points lower than Japan’s 74 basis points. The spread on CDS reflects the cost of hedging credit risks on corporate or sovereign debt.

A steep rise indicates deterioration in the credit of government bonds and higher costs for bond issuances.

The financial markets shrugged off the nuclear test as investors have become accustomed to geopolitical risk, analysts said. The vice minister said the North’s test seems to have had a limited impact on the financial markets and the Korean economy, but warned of further risks.

According to the finance ministry, risks linger as the international community pushes for harsher punishment against North Korea. Pyongyang warned that it would take further actions if the United States moves to penalize the North for its latest atomic test.

“The North Korean issue has not affected the South’s sovereign rating so far,” Shin said. “The nuke test is not likely to have an impact on the country’s credit rating in the short term.”