Feb. 18 to March 31: The Exchange Bar at JW Marriott Hotel Seoul is holding a happy hour during which guests can try unlimited cocktails every afternoon from 6 p.m. to 9 p.m.

Each day will have a different base booze: Monday is gin, Tuesday is rum, Wednesday is vodka, Thursday is tequila and Friday is whisky. Four cocktails will be available each day, and all of them will be on offer on Saturday and Sunday.

The Korean finalist at the 2012 Diageo Reserve World Class cocktail competition will be behind the bar. Snacks will also be 30 percent off. The price is 28,000 won, including tax and service charges.

Feb. 23 to April 28: The Pavilion, the hotel’s lobby lounge and The View cafe are holding a “Very Berry Strawberry” dessert event on weekends from 2 p.m. to 5 p.m. 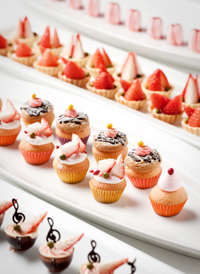 A wide range of strawberry delights along with coffee, tea and punch will be on offer. For adults, the price is 55,000 won per person; it’s 30,000 for kids. Tax and service charges are included. If you leave before 3 p.m., you’ll get a 15 percent discount. Reservations are required.

March: Seasons, the hotel’s French restaurant, is offering a signature seven-course menu by Chef Park Hyo-nam during the month of March.

Dishes include marinated abalone and shrimp with chestnuts and cucumber in wild sesame dressing and fresh vineyard bourguignon snails.

Through April 10: The Lotte Hotel World, next to the Lotte World amusement park, is offering a package deal in which hotel guests can watch the musical “Joseph and the Amazing” at Charlotte Theater, located in the proximity of the hotel, and stay one night.

The deal includes a night in a Deluxe Room and two R-seat tickets. It costs 320,000 won.

A similar package enables guests to stay in a Deluxe Room on the Club Floor and also includes two R seat tickets along with Club Lounge service for two. It is 400,000 won.

In the Club Lounge, guests can enjoy afternoon tea and evening cocktails with snacks on the check-in day and a breakfast buffet on the following morning. All prices are subject to taxes and service charges.

Cornerstone will fuel its oven with different types of lumber according to the season, changing from oak to orange and cherry to chestnut.

The dishes are overseen by executive chef Massimiliano Ziano and Cornerstone chef Federico Heinzmann, both of whom are from Italy.

One new dish is a 500 gram cut of American Creekstone T-bone steak and potted foie gras layered with grape-quince jam and Norwegian salmon wrapped in paper bark to preserve the juicy flavor.

Prompted by the success of the bento promotion last year, Irodori will continue to offer the deal this year. A bento consists of an appetizer, sashimi, braised fish or vegetables, grilled fish, assorted tempura and more. All items are prepared by the hotel’s master chefs.

Lunch Bento boxes start at 52,000 won, including tax. There is a minimum order of five boxes, and reservations should be made at least two days in advance of the delivery day.

Delivery is limited to the Gangnam area. A 10 percent service fee will be added to delivery orders.

* Information is culled from the hotels.