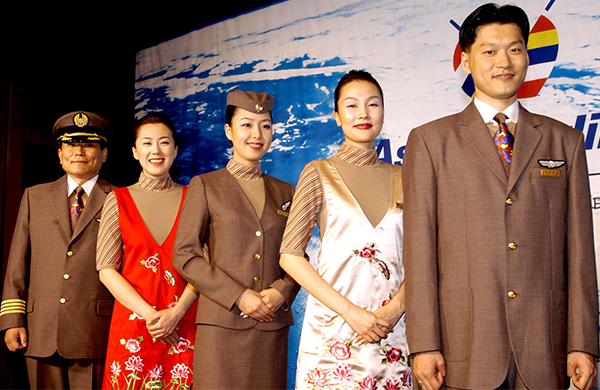 Asiana uniforms that were first unveiled to the public in 2003. A labor union for Asiana Airlines filed a petition to the National Human Rights Commission of Korea about a year ago. The human rights body said on Feb. 4 that the nation’s second-largest airliner should provide pants for its female crew members. [JoongAng Ilbo]


Pants or skirts: it’s a routine daily morning choice for some working women. As simple as choosing between an americano or a cafe latte. But for Asiana Airlines flight attendants, there isn’t much of a choice.

The Asiana dress code details, among other things, the size and substance of earrings, length of skirts, color of hair and type of eye makeup the female attendants can wear. Their dress code is more than 10 pages long, while their male counterparts have only two pages to abide by.

After rounds of negotiations within the company and no progress, the women eventually brought the issue to the country’s human rights commission.

A year since street rallies and press conferences that saw Asiana stewardesses openly weeping for their rights, Kweon Soo-joung, a crew member who leads a labor union at the nation’s second-largest carrier, finally got an answer from the National Human Rights Commission of Korea last Monday.

The human rights body said Asiana’s skirt-only rule “implies sexual discrimination as it requires women to be shown in certain ways and the dress code also makes it hard for female flight attendants to protect passengers in the event of an emergency.”

The statement continued, “The dress code is excessive compared to that of other airlines. Most others offer both skirts and pants for female crew members.”

As of last year, Asiana employed 3,493 people as crew members and 95 percent of them, or 3,305, are female flight attendants.

The recommendation of the human rights commission sheds light on a type of labor where appearance is important to the daily duties of the worker, relatively unknown compared to other types of work that involves the general public. 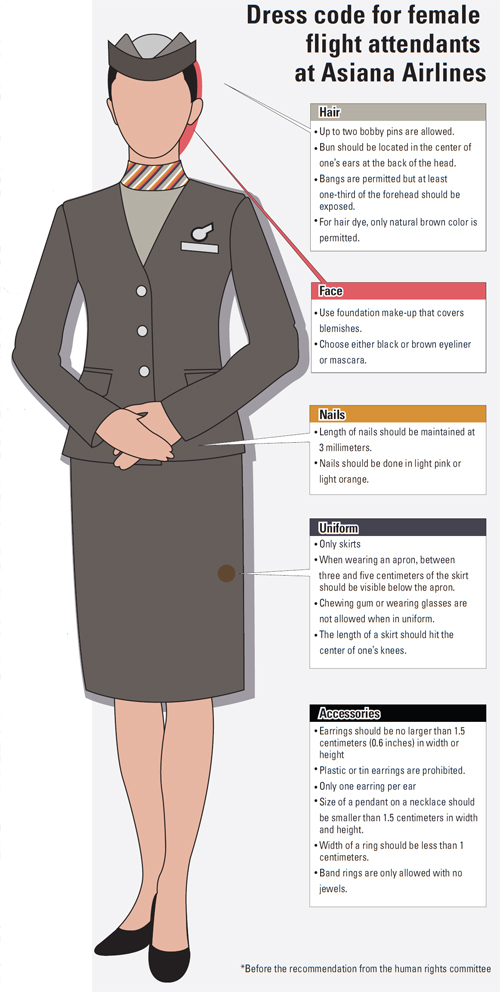 Although the recommendation of the human rights body is non-binding, Kweon and many of her female co-workers at Asiana are still asking for the right to opt for trousers.

Kweon said it is too early to be happy with the victory.

“When we did the press conference in front of the company building in Gwanghwamun, I was ashamed of asking for such a right,” said Kweon over the phone.

“I think we just started. The company must be willing to work on the issue and the human rights body also has to follow its recommendation,” added Kweon.

Asiana Airlines doesn’t have an immediate plan to provide pants for female crew members, but it altered the language of its dress code even before the human rights body announced its stance on the issue.

“We respect the recommendation of the National Human Rights Commission of Korea,” said Seo Ki-won, an official working at the public relations team of Asiana Airlines.

“We will consider producing pants the next time we produce a new line of uniforms. But some of the requirements have already loosened up.

“For example, lengths and specific colors of nails were written in the code, but now it only says nails should be neat and tidy,” added Seo.

Up to two bobby pins were allowed and a bun had to be located in the center of one’s ears, but the recently updated guideline only says hair shouldn’t fall while crew members are on duty, according to Kweon.

Some rules have changed but there are still more than 10 pages of guidelines to follow.

Korean Air, the nation’s largest airline, began offering pants in 2005. Other airlines also provide pants but most of them stick to the same, detailed guidelines for their female crew members as Asiana.

“We have rules to follow from our head to toes,” says a flight attendant who’s been working for Korean Air for more than 10 years. She asked to only be identified by her surname Choi to avoid any future negative consequences from her company.

“We can choose between pants and skirts on our own but I mostly wear pants. That’s because we have more work to do compared to Western flight attendants.

“People in Western countries put their luggage into the overhead bins by themselves, but Asian passengers ask for more help and attention from us and they take it for granted. It means we have to work more than some other flight attendants. Because of this, I can’t imagine myself wearing only a skirt,” added Choi.

Choi said, however, between 80 to 90 percent of her co-workers choose skirts over pants.

A junior cabin crew member who’s been working for Korean Air for a full three years is one of them. Since her family name is unique, she didn’t want to reveal her surname.

“The pants are quite tight so the line of your underwear is visible. Instead, I usually wear skirts that are one size up.”

According to the junior cabin crew member, the official appearance check session doesn’t exist anymore but she still has to look perfect at all times. Otherwise, she loses points, which is how the company evaluates its employees.

“There is a designated shoe repair shop. We have to purchase vouchers and shine our shoes on a regular basis. One end of our scarf has to point sharply upward. Seniors also check our aprons whether they are well ironed or not.”

One local carrier, Jin Air, allows its flight attendants to wear jeans, polo shirts and baseball caps, but this is part of its marketing strategy to brand itself as the more youthful, budget airline of Korean Air.

Some private companies including airlines, hotels and luxury goods stores say the look of every single employee adds up to the entire corporate image. That’s why they have the right to regulate the look of their employees.

Some five-star hotels, both local and foreign chains, have strict guidelines. Female employees are required to wear panty hose and the color should be either nude or coffee throughout the year, even in summer. They also must wear solid black shoes without any decorations.

“Some jobs may require certain dress codes, but if the rule is only applied to a certain gender, it is very problematic,” Shim Seon-hee, a lecturer at the University of Seoul, said during a debate hosted by the National Human Rights Commission of Korea in October of last year. The debate was organized to discuss the issue of Asiana Airlines’ skirt-only rule.

The primary definition of a flight attendant is someone employed by an airline to ensure the safety and comfort of passengers on board.

In comparison to foreign carriers that employ brawny female crew members in their 40s and 50s, it might lead one to believe that Korean carriers have a markedly different definition of stewardesses.

By wearing a tight pencil skirt, how can these bony attendants lift heavy luggage into the overhead bins?

Experts say Korean airlines see the job from a different point of view.

“These companies don’t think of the job as a career, but they consider these female crew members as people who serve customers - who are assumed mainly to be males - with their looks and youth,” says Kim Hyun-mi, a professor of cultural anthropology at Yonsei University.

She continues, “Most workers become more skillful and experienced as they keep working, but the companies don’t expect such things from female flight attendants. In that sense, this job itself is very sexiest.”

According to Kim, airlines should put a priority on how flight attendant hopefuls can cope with emergencies, how they can suppress disorderly passengers and their foreign language skills when hiring. But the reality is very different.

Park, 26, has been preparing to become a crew member for five months. Over the past months, she has had two interviews, one for Korean Air and another for Asiana Airlines.

Park says she used to think flight attendants had it easy, that they were just pretty faces, but she changed her mind when she started preparing for the flight attendant test.

“I’ve realized there are many more important assets than a pretty face to become a flight attendant. For example, you have to be physically strong to pass all the tests.”

But she soon realized a pretty face would take her to the next round.

“Eight candidates go into the interview room and judges look at us for one to two minutes. In a couple of minutes, they select people who will go to the next round,” says Park. “Think about it. What do they see in that short period of time? Our faces.”

“Every flight attendant hagwon (private institute) is connected to plastic surgery clinics and the clinics give us special discounts. Students often receive simple medical procedures on their faces or go through liposuction because they have to wear the tight skirts.”

Park has been preparing for both local and foreign airlines at the same time, but she sees a stark difference between the two.

“I got the impression that foreign airlines respect their employees. For instance, KLM of the Netherlands offers all different lengths of skirts to female cabin crews,” says Park.

“But I felt like national carriers are in search for people who can fit their rules.”

Nevertheless, Park, a desperate job seeker who graduated from a good university with decent Toeic scores, waits for her results to come out from Asiana Airlines today at 5 p.m. sharp.