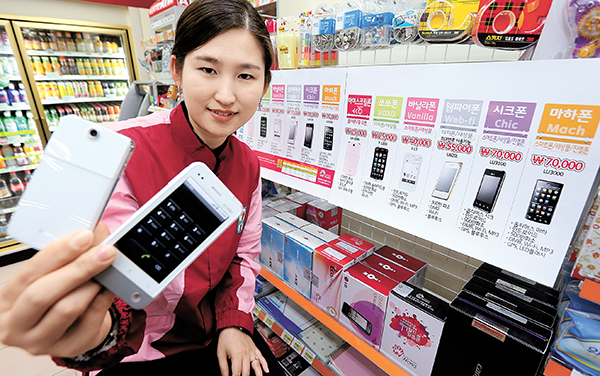 A 7-Eleven clerk in central Seoul holds up a LG thrifty smartphone. A rocky economy and cheaper monthly phone bills been attracting customers to thrifty phones, which were owned by 1.28 million customers as of the end of last year. [YONHAP]

Say you make 200 minutes of phone calls and use a maximum of 1.5 gigabytes of data a month with your smartphone. That requires you to spend a base monthly fee of 42,000 won ($38) with one of three mobile carriers - SK Telecom, KT and LG U+.

Given your scanty use of your phone, there’s a much better option: Buy a thrifty phone, which in Korean is called “altteul phone” and sign up to one of the mushrooming new telecom services that are all about saving money.

If only you are okay using a relatively less cutting-edge smartphone and less than 100 megabytes of data per month, that will slash your monthly phone bill by 12,500 won. If you go so far as to downgrade to a feature phone costing only up to 100,000 won - the kind of “dumber” phone popular before smartphones - your base monthly mobile phone bill can drop to as much as 4,500 won, although you will pay for each second of a phone call, up to 1.8 won per second, or 108 won per minute.

As the domestic economy gets a bit rocky and consumers start realizing they have more choices in phones than just the latest iPhone or a Galaxy S, altteul phones have been steadily gaining users. 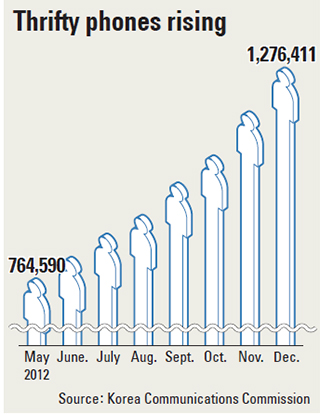 As of the end of last year, thrifty phone users totaled 1.28 million, up from 764,590 last May. Still, the portion of low-cost phone users out of the entire mobile phone population is low here, standing at a mere 2.4 percent, versus 8 percent in the United States, 20 percent in Germany and 12 percent in Britain, according to data from the National Assembly Research Service.

In May last year, the Korean government implemented a new system that allowed phone manufacturers, discount stores and online shopping malls to sell any kind of mobile handset, including used ones. Previously, only mobile phone stores could sell phones and consumers bought service plans at the same time from the main carriers.

With the launch of the new policy, the Korea Communications Commission (KCC), the top government authority overseeing mobile policies, made it possible for smaller businesses to lease wireless data spectrum from the big mobile carriers and offer wireless communications services. Those smaller firms are called Mobile Virtual Network Operators (MVNOs) and there are currently 26 of them. Although the monthly fees charged by the MVNOs are much cheaper, the quality of mobile services is hardly different from that of three mobile carriers, the KCC says.

“The MVNO system is aimed at fanning competition in the mobile communication market, which was and still is heavily controlled by the three key carriers, who are way too complacent about their dominant status,” said the KCC in a statement. “It is also meant to provide wider consumer choices and to lower monthly charges for those households struggling under costly mobile bills.”

After six months, during which the majority of thrifty phones were sold at flagship stores run by Samsung and LG, convenience stores jumped on the bandwagon to join hands with the MVNOs.

Korea Seven, widely known here as 7-Eleven, was the first among convenience stores to sell them, followed recently by CU and GS 25. The feature phone called “Second Phone” from Korea Seven with a price tag of 84,900 won has sold 20,000 units as of earlier this month. This year, large discount chains such as E-Mart, Lotte Mart and Homeplus are expected to join in the business, although they have yet to come up with exact dates.

“We hope larger stores will contribute to the rising awareness of altteul phones and further boost the entire market of such devices,” said a spokesman with one of the MVNOs.

On Jan. 29, the cheapest among all thrifty phones debuted at CU, the convenience store chain formerly known as Family Mart. It started selling used phones that are branded “Re-Heart,” which carry a uniform price tag of 29,800 won, at least one third of their original retail value.

The devices are refurbished 3G-based feature phones from Samsung Electronics and LG Electronics. CU put 1,500 units on its shelves across 270 outlets in Seoul on a trial basis.

“Although the smartphone penetration rate has become high, there are still 22 million users of feature phones in Korea, meaning there is still a big demand for cheaper phones with lower function,” said a spokesman with CU. “Convenience stores are expecting a lot from the thrifty phones.”

GS25 went one step farther by offering thrifty smartphones on Jan. 24. Its Samsung’s Galaxy U sold for 70,000 won and iRiver’s Vanilla smartphone sold for 55,000 won. Four days later, Korea Seven debuted LG’s Optimus Chic and Optimus Mach at 70,000 won. All of them run on the Android operating system. Including those models, there are now around 10 thrifty phone models available selling at the three convenience stores.

In addition to the low handset prices and monthly fees, so-called “convenience store phones” do not require initial subscription fees, which is a must in the existing phone purchasing system, and users can leave the carrier whenever they want. Previously, users were usually forced to subscribe for at least two years in return for discounts on a handset, which are paid in monthly installments.

But some warnings are needed for prospective buyers, especially those accustomed to high-end mobile devices: Do not expect too much technology in the smartphones sold at convenience stores. They were mostly released two years ago or longer, and many didn’t sell because consumers didn’t like them. Some of their operating systems are impossible to upgrade because they are too outdated.

If you are considering subscribing to long-term evolution (LTE) connectivity with one of those convenience store smartphones, there are some problems. LTE plans offered by SK Telink, one of the MVNO’s, have turned out to be only 3,000 won cheaper than LTE monthly plans for smartphones offered by three key carriers.

KT was the first of the three big carriers to provide LTE connections for thrifty phones in September, but it charges the same monthly fees for the smartphones it sells.

Also, although there will probably always be a market for cheaper phones, Korean consumers have gotten used to waiting for the right time to get a great bargain from the main telecoms.

The government has tried putting ceilings on the telecoms’ subsidies for handsets at 270,000 won, but the carriers regularly and randomly offer bigger subsidies to grab more subscribers, and consumers are used to getting them.

“Key mobile service operators have spoiled the market with the weapon of excessive subsidies, wreaking havoc with the whole idea of altteul phones,” Jeon Byung-hun, a lawmaker with the opposition Democratic United Party, said last month at a panel discussion on mobile market.

He plans to propose a bill to “promote altteul phones” next month to further provide policy-wise support for the cheaper phones. He suggests mobile phone sellers and mobile service carriers be entirely separate and he wants the government to go so far as banning the subsidy system.

However, thrifty phones don’t seem to be a serious concern for the three big mobile carriers, given their small slice of the pie at least for the moment.

“Altteul phone users are only 2.4 percent. They are not the market movers,” said a source with one of three mobile carriers. “We don’t think the cheaper phones will rattle the market. Also, the subsidy issue has been so chronic in the past decade or so that it has never been resolved and we don’t anticipate it to be.”