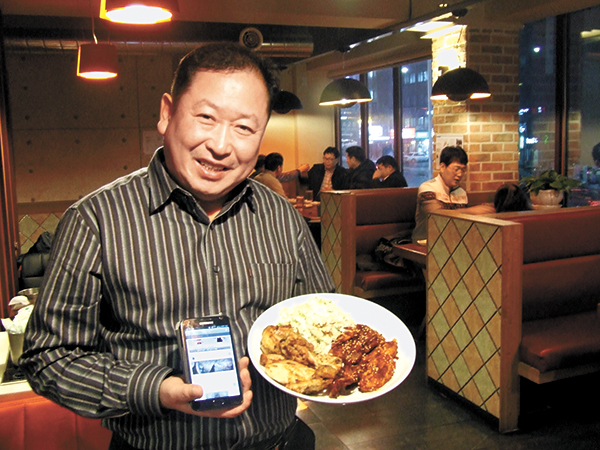 Han Jeong-soo, the 52-year-old owner of Geumgang Barbecue in Banpo-dong, southern Seoul, poses with a chicken dish and a smartphone displaying the location-based SNS marketing app SeeOn. Han saw a 20 percent sales increase after utilizing the SNS marketing app. The app sends a variety of discount offers and event messages to smartphone users around the restaurant and shows pictures of new menu items. Provided by FC Changup Korea.

The number of self-employed Koreans is growing again due mainly to the early retirement of baby boomers who are on the lookout for second careers.

And even though economic times may be difficult, Kang Byung-oh, a professor specializing in startup company studies at Chung-Ang University, says certain concepts offer hope to people trying to start out in a new business.

Kang’s first recommendation is to utilize location-based SNS marketing, which is cheap, cost effective and has a great impact on young consumers.

“Location-based SNS, such as Foursquare, is booming in the U.S.,” Kang said. “And since people having smartphones is even more common in Korea, SNS will emerge as a new means of marketing.”

Han Jeong-soo, 52, has been operating Geumgang Barbecue for 27 years in Banpo-dong, southern Seoul. He is marketing his chicken restaurant through SeeOn, a location-based SNS app.

It attracts the attention of potential customers by sending a variety of discounts and event messages to smartphone users around the restaurant along with photos of new menu items.

In addition, it allows “communication marketing,” which lets customers to leave comments or reviews of the restaurant and the store owner can reply immediately. If there are complaints, he can apologize or offer freebies should the customers return.

After Han started his SNS marketing, his restaurant became more popular with young professionals in their 20s and 30s and its sales increased 26 percent. Han only spends 50,000 won ($46) in SNS marketing costs every month.

The second differentiation strategy professor Kang recommends is convergence, which refers to broadening a customer base by combining your old business with something totally new.

Parkga Army Stew chain increased its stores’ operating rate by 20 percent through offering army stew, which used to be the only item on the menu, at night and also offering chicken galbi. It even changed its name to Parkga Army Stew and Chicken Galbi.

At a Cafe Nescafe store in Yeoksam-dong, southern Seoul, sales of homemade sandwiches now account for 30 percent of total sales.

“Inspired by the idea that there is no sandwich shop around here, I started purchasing fresh vegetables every morning to make sandwiches on the spot,” said Kim Eun-hee, 38, the owner of the store.

Another cafe chain, Cafe Bene, also succeeded by starting to offer gelato ice cream and waffles, which Starbucks does not.

A third strategy for housewives who want to go back to work is to use their educational backgrounds to start some kind of education business for children, Kang said.

It takes time to set up, but the chances of success is high because parents are always on the lookout for things to make their children smarter.

CMath is a program that trains kids in thinking skills for math and fosters their creativity and problem-solving skills.

It conforms to the Mathematics Education Advancement Plan released by the Ministry of Education, Science and Technology last year, Kang said.

Another business niche is cafe type bars and Korean izakaya bars, Kang said, which are popular among young female customers in their 20s and 30s.

Shops selling makgeolli, or rice wine, and noodles and jeon, Korean pancakes, are being transformed into Korean izakaya by adding sake and various Japanese munchies.

“Customers can enjoy a luxurious drinking culture at affordable prices at Korean izakaya, as they are 30 percent cheaper than existing wine bars,” said Kang.