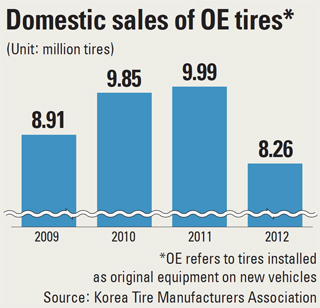 According to data from Kotma, local manufacturers reported sales of 25 million tires last year, down 1.6 percent from 2011. Production also fell slightly to 97.11 million, a 0.1 percent drop from a year earlier.

According to the Korea Automobile Manufacturers Association, Hyundai, Kia, GM Korea, Renault Samsung and Ssangyong produced a total of 4.55 million vehicles in 2012, down 2.1 percent from 2011, and domestic car sales dropped 4.3 percent year-on-year to 1.41 million. As a result, sales of original equipment tires, which are installed at new cars at the factory, were 8.26 million units last year, a 10.8 percent decrease from 2011, Kotma said.

In contrast, sales of replacement tires increased 3.6 percent to 16.78 million as Korean drivers hung on to their cars instead of buying new ones.

Despite downturn in the Korean market, the country’s three top tiremakers ? Hankook, Kumho and Nexen ? all reported impressive international sales, with exports jumping 3.3 percent year-on-year to 73.67 million units on strong demand in emerging markets, according to Kotma.

Kumho, the No. 2 player, also announced last week that its 2012 operating profit more than doubled year-on-year to 360.8 billion won, while sales increased 4 percent to 4 trillion won.

Industry insiders said Korean tiremakers face tough competition from foreign manufactures not only in the global market, but also at home.

According to Kotma, the imported tire market is growing rapidly along with foreign car sales, which rose 24 percent in Korea last year. The organization added that lower tariffs due to free trade agreements with the United States and European Union also eased the way for foreign tiremakers to tap the Korean market.

Last year, $481 million in foreign-made tires were brought into Korea, up 8.3 percent from 2011. Sales of the U.S.-made tires jumped 28.5 percent and Italian tires 15.1 percent, according to Kotma.

“Sales of tires are closely related with automobile sales,” said a Kotma official. “As the automobile sales forecast for this year is not so positive, tire industry growth should also be limited.”