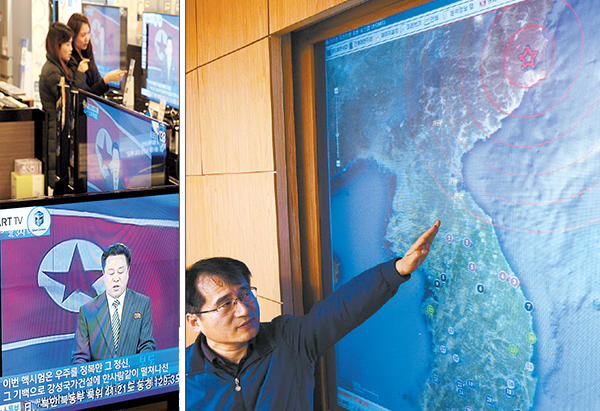 Right: An official in charge of earthquake monitoring at the Korea Meteorological Administration in Seoul gives a briefing about the artificial earthquake the agency detected yesterday morning, which was later confirmed as North Korea’s third nuclear test. [NEWSIS] Above: TV sets in a shop in Seoul yesterday play the North’s official announcement. [NEWSIS]

“This nuclear test was carried out as an actual countermeasure to safeguard our national security and sovereignty, in reaction to the United State’s atrocious hostile acts that infringed our right to develop our legitimate peaceful satellite launches for the republic,” the report said.

Pyongyang maintained that the rocket test in December was actually a mission to send a satellite into space, which the rest of the world doubts.

The reports said that the third test was more powerful and sophisticated than the previous two.

“Unlike the former tests, this test was carried out in a perfect, high-level and safe conditions, using miniaturized and lighter atomic bombs that have stronger explosive force than previous ones,” it said. “The estimated figures, such as the nuclear bomb’s characteristics and power, were all perfectly identical to those in the actual test, proving the excellence of our nuclear deterrent.”

Hours before the official announcement, seismic activity of a magnitude of 4.9 was detected at around 11:57 a.m. near a nuclear test site in Punggye-ri, Kilju County, North Hamgyong Province in the northwest of the country, South Korea’s state-run Korean Meteorological Administration reported.

The earthquake-monitoring agency analyzed its seismic wave and confirmed it was an “artificial earthquake.”

Seoul has yet to confirm whether the quake was caused by an underground atomic test or not. That can only be confirmed through samplings of radioactive substances in the air, it said.

The test site in Punggye-ri was the same where the first and second tests were conducted in October 2006 and May 2009.

The Korea-U.S. joint forces also raised its alert to the second-highest level of Watchcon 2 from Watchcon 3 to guard against any military attacks from North Korea.

“We assume North Korean carried out a nuclear test,” Kim Min-seok, the spokesman of the Defense Ministry, told reporters. “We will keep a close eye on further movements of North Korea, and depending on the result of the analysis [on the quake], we will take stern action against the regime in cooperation with the international community and through the alliance with U.S. forces.”

Kim said that the military estimates the explosive force of test was similar to that of the 2009 second nuclear test, equivalent to 6 or 7 kilotons of TNT bombs.

Kim estimated 10 kilotons at the beginning of the briefing, but later downgraded his estimate.

One kiloton is the equivalent explosive power of 1,000 TNT bombs exploding at the same time. The atomic bomb dropped on Hiroshima during World War II was about 10 to 15 kilotons, historians estimate.

“Although the third test appears to have developed from the former two tests, a normal nuclear bomb records at least 10 kilotons of explosive force,” Kim said.

Whether Pyongyang used highly-enriched uranium fuel for the test is not confirmed, Kim said. The first two tests were based on its plutonium weapon program.

“Technically, after an atomic test, some gases would emit [from the underground site],” Kim said. “The gases can be collected or not.” If gases can be detected, the outside world may be able to know if the bomb was based on uranium or plutonium. But after the 2009 second nuclear test, no gases were detected.

Defense Minsiter Kim Kwan-jin said at a National Assembly meeting yesterday that he doesn’t rule out the possibility that the North would conduct an additional nuclear test.

The minister said Pyongyang appears to have used the western tunnel at the test site and there is another tunnel that can still be used for an underground test.

A high-ranking Blue House official said Pyongyang reported its plan to conduct a nuclear test to Washington and Beijing on Monday.

“On the prior day [Monday], we found a handful of clues that the North would carry out its nuclear test,” the official said. “In the previous tests, the regime notified its plan for the tests to the United States and China in advance.

President Lee Myung-bak convened the National Security Council in an underground bunker of the Blue House to discuss further measures in response to the test.

The UN Security Council (UNSC) called for a meeting yesterday and planned to issue a statement. South Korea holds the rotating presidency of the council this month.

Since the UNSC unanimously passed Resolution No. 2087 against North Korea denouncing the December rocket launch and expanded financial sanctions, the regime has issued a string of threats suggesting a nuclear test.

Some analysts speculated that the timing was related to U.S. President Barack Obama’s state-of-the-union speech, which is scheduled for Tuesday evening Washington time.

North Korea carried out the two former tests on national holidays of the United States.