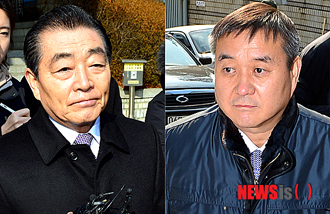 A Seoul Court yesterday convicted two Blue House officials for their role in irregularities surrounding the outgoing President Lee Myung-bak’s now-defunct retirement home plan, which led to the first questioning of the incumbent president’s son by the special prosecution in history last year.

In delivering its verdict, the court stated the process to purchase land for the outgoing president’s retirement home and its auxiliary facilities for secret service “requires a strict procedure” as “it involves taxpayers’ money.”

The court also stated that the two officials “clearly committed a breach of trust” by “arbitrarily fixing a price tag” on the land that “went beyond respectful treatment for the president.”

“We took into account the fact that the losses to state coffers were recovered and the two did not gain private profits [from the deal] while their reputation was damaged,” the court said.

The two former officials were indicted by the special prosecution team last November without physical detention for causing a loss to taxpayers of 972 million won ($894,240).

The independent counsel team charged the two with purchasing land in Naegok-dong, on the southern outskirts of Seoul, which was planned for use by the security service, for 4.28 billion won, though its actual value was 3.37 billion won.

The independent investigators judged following their 30-day investigation last November that the president’s son Si-hyung was able to buy the land at below-market-price as the two that were indicted purchased the land for the security service at a higher price at the taxpayers’ expense.

The special prosecutors did not indict the 35-year-old son as he did not violate the country’s real estate law.