Plan to transfer TV watchdog a cause for concern

Plan to transfer TV watchdog a cause for concern 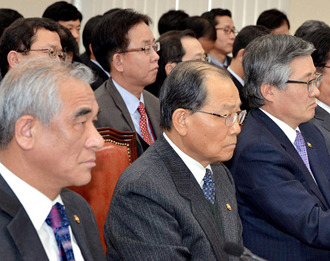 The incoming Park Geun-hye administration’s ministry reorganizing plan to hand over significant roles of the Korea Communications Commission to the soon-to-be launched Ministry of Future Planning and Science has raised concerns and conflicts among politicians and industry players.

Under the reorganization plan, regulation and monitoring tasks related to program providers, such as CJ E&M, and the cable television system operator, such as CJ HelloVision, will be overseen by the new ministry.

The state-run communications watchdog will retain its monitoring duties for terrestrial broadcasting channels such as KBS and MBC and general programming networks such as JTBC and Channel A.

The commission will also keep its supervision role for cable news channels. If the transition plan is realized, cable channels launched by mega media groups will be exempt from regulations enforced by the commission, raising worries that only a few cable networks will monopolize the cable industry.

The current share structure of the cable TV industry illustrates reasons for concern.

Both companies are affiliates of CJ Group.

“The new plan by the transition committee will likely give an exclusive boost to program providers owned by conglomerates,” said journalist-turned lawmaker Shin Kyoung-min of the major opposition Democratic United Party.

“The resulting situation could be the one in which the media industry is fully controlled by some particular companies [that own cable channels].”

One cable network industry official, who asked that his name not be disclosed, noted the future ministry could only reinforce the present dominating media groups if it focuses on fostering the media industry (rather than on regulating it).

Critics of the plan also point out the upcoming ministry, which will be in charge of overseeing programs produced by cable network channels, will not be completely independent from political peddling as it will be led by a president-appointed minister.

The current practice tries to ensure a checks and balances and political neutrality as five commissioners at the watchdog institution, who discuss and produce policies, are appointed at the recommendation of the president and both ruling and opposition parties.

Skeptics of the reorganization say political neutrality could be at risk as the president-appointed minister could wield unchecked authority over media policies in favor of the administration.

“A whole line of broadcasting policies could be directed by a single signature by the minister who takes direct orders from president,” said You Seong-hee, a DUP member of the National Assembly Committee on Culture, Sports, Tourism, Broadcasting and Communication.