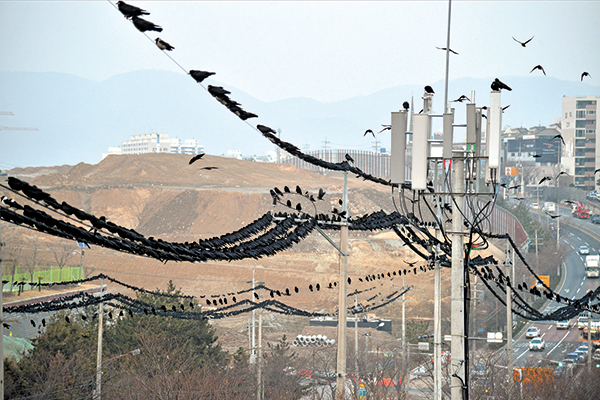 A murder of crows sits on power transmission cables in Ulsan. Residents complain of the droppings from about 46,000 crows that migrate from Siberia between October and March. [NEWSIS]

ULSAN - At about 4:30 p.m., the 27,000 residents in Nam District, Ulsan bring in the laundry from their rooftops they have hung out to dry.

They’ve done this every day for about 10 years. If they don’t bring their laundry in, it will be covered in bird droppings. The droppings come from about 46,000 crows that migrate from Siberia to the 65,000-square-meter (16-acre) bamboo grove near the Taehwa River.

The birds have been migrating there since 2002. They come to the area every October and stay until March. The problem is that the crows usually take a two-hour break on the 1.9-kilometer (1.2-mile) long cable lines that connect two power transmission towers in the Nam District before they continue on to the bamboo grove in the evening.

During this time of day, the crows fly around the towers including residential areas in Mugeo-dong and Dong-dong in Jung District. The birds have stressed the residents in the area for 10 years and the complaints regarding the issue have piled up.

Windshields of cars parked around the area and roofs are covered in droppings. People walking the streets are sometimes victims of an unexpected attack. The Ulsan branch of the Korea Electric Power Corporation (Kepco), recently said they are considering installing an underground system to remove the towers completely.

“If we do that, the crows should go directly to the bamboo grove,” said Kang Seung-bae, spokesman for Kepco.

He added that they have officially requested the Ulsan city government pay half of the 24.5 billion won ($22.3 million), the total expense for the project, on Jan. 31.

Residents say the city government is only worried about losing tourists.

“A huge amount of tourists come to the area to see or take pictures of those crows flying in groups,” said a resident surnamed Park, who has been living in the area for 11 years.