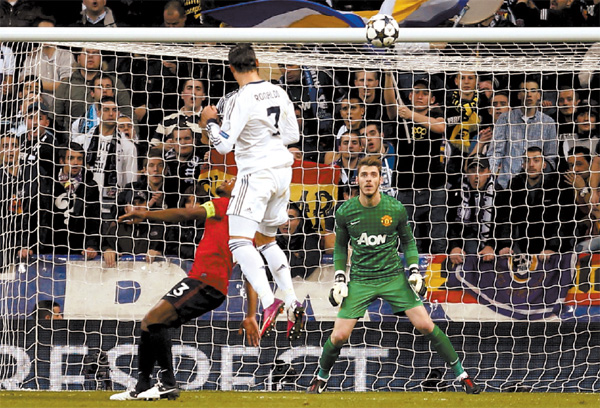 MADRID - Cristiano Ronaldo scored with a spectacular header Wednesday as Real Madrid was held to a 1-1 home draw by Manchester United in the last 16 of the Champions League due to a dominant performance by visiting goalkeeper David de Gea.

After Danny Welbeck gave United the lead against the run of play with a header from a 20th-minute corner, Ronaldo rose high to meet Angel di Maria’s swinging cross 10 minutes later for his 183rd goal for Madrid - and first against his former club.

“We began very strong and suddenly they scored and the match took on another form for us,” Madrid coach Jose Mourinho said.

De Gea made several impressive saves, including a fingertip effort onto the post to deny Fabio Coentrao in the first half as well as holding a firmly struck bouncing shot from Sami Khedira after the break.

“Fortunately, David de Gea made some very good saves. He’s been improving all season and he made an absolutely superb save there,” United manager Alex Ferguson said of his oft-maligned goalkeeper’s stop on Coentrao’s attempt.

“The first half I was a bit disappointed by how deep we defended and gave Real a lot of opportunities for crosses and shots.”

The match had been built up as Mourinho against Ferguson and Ronaldo versus Robin van Persie, but the United striker failed to take advantage of several good opportunities. He struck the crossbar with a fierce right-footed strike and forced a save with a low drive late on, however a mishit volley that was cut out by Xabi Alonso as it neared the goal line proved to be his most glaring miss.

By contrast, Ronaldo was a constant menace without ever really threatening to cut loose. He sent several shots past de Gea’s posts and even landed a 35-meter (114-foot) free kick on the top of the goalkeeper’s net.

“Manchester is a very strong team defensively and they created a few problems for us,” Ronaldo said. “But we really needed to have scored one or two more goals.”

The last time these two teams met at the Bernabeu was in 2003 when Madrid emerged 3-1 winners. But it has been 11 years since Madrid played a knockout Champions League match without goalkeeper Iker Casillas, who was out because of a broken hand and replaced by Diego Lopez.

Mourinho also chose 19-year-old French center back Raphael Varane following his great performance against Barcelona in which he almost single-handedly rescued Madrid in the first leg of the Copa del Rey semifinals that ended in a 1-1 draw.

First-choice center back Pepe was on the bench as has been recovering from surgery on his right ankle in early January. He came on late Saturday to take part in Madrid’s 4-1 trouncing of Sevilla, a match in which midfielders Mesut Oezil, Alonso and Khedira were rested in anticipation of United’s visit.

Ferguson opted to start Jonny Evans alongside Rio Ferdinand in defense with club captain Nemanja Vidic failing to even earn a place on the bench due to his recent lengthy layoff. Shinji Kagawa was also promoted but proved ineffectual against Madrid’s bustling midfield and was replaced in the second half.

United’s European campaigns in the previous two seasons have been ended by Spanish sides, going out in the Europa League to Althletic Bilbao last year and losing the Champions League final to Barcelona in 2011.

Borussia Dortmund twice came from behind to draw 2-2 at Shakhtar Donetsk in the other opening leg of a last-16 series on Wednesday. AP