Ryu Hyun-jin is settling in at Dodgers camp

Ryu Hyun-jin is settling in at Dodgers camp 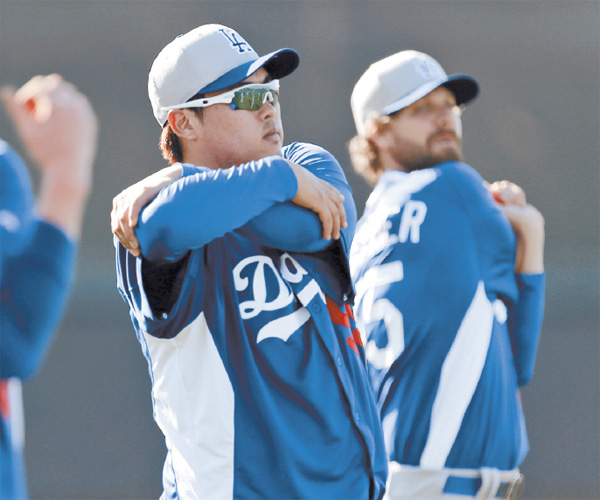 Two days into the spring training, Ryu Hyun-jin already seemed to have a hunch about who will be his biggest competitor on the Los Angeles Dodgers.

The 25-year-old Korean pitcher acknowledged on Wednesday in Arizona that he was impressed by Clayton Kershaw, 24 years old, adding he felt he could match his fellow southpaw.

Ryu was scheduled for his first bullpen session on Thursday, giving manager Don Mattingly his first look at his new pitcher.

“It seems almost similar [to mine]. If I pitch tomorrow, I think I would be able to pitch at such a pace.”

Kershaw, winner of National League Cy Young Award in 2011 and a two-time All-Star, is vying for the top spot in the rotation with Zack Greinke, 29, who signed a six-year, $147 million contract in December.

Since joining the Dodgers in 2008, Kershaw has a record of 61 wins against 37 losses with a 2.79 ERA. He is considered one of the few pitchers - including 2011 American Cy Young award winner Justin Verlander, 29, of the Detroit Tigers - who might get a $200 million contract. He will become a free agent after the 2014 season.

After signing with the Dodgers for six years and $36 million in December, Ryu has said he will compete for the third starter position, along with Josh Beckett, Chris Capuano, Aaron Harang, Ted Lilly and Chad Billingsley.

Ryu has expressed confidence that he can impress the Dodgers coaches but said that he won’t be in a hurry.

He planning to throw 35 to 40 pitches at the bullpen session, a mix of fastballs, change-ups and curveballs, but not his slider. He said a slider could strain his elbow when he has not yet reached top condition.

“I don’t intend to show too much,” he said. “Other pitchers seem to be pitching as their current conditions allow.

“I think I would have to keep building up body condition throughout preseason games.”

That Ryu is not yet in his best condition was apparent during a workout session on the second day of spring training on Wednesday. He came in second to last among 25 players in a 1.6-kilometer (one-mile) run.

“It seems like they run faster in a long-distance run session than in Korea,” he said.

He said the group training time is shorter than he thought and he would spend more time in individual training.

Ryu also was planning to grab a bat for the first time on Thursday. In the National League, there is no designated hitter so pitchers must bat.

“I haven’t picked up a bat here yet,” he said. “It is the first time in seven years, and I would try to just hit the ball.” He said he would concentrate on practicing bunting.