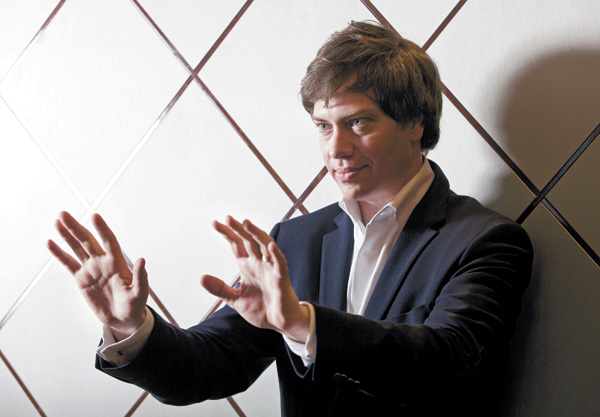 Steve Barakatt, a Canadian pianist from Quebec, came to Korea to celebrate Valentine’s Day with his Korean fans. By Park Sang-moon

New age pianist Steve Barakatt’s name may be unfamiliar to some, but his music will definitely ring familiar to Koreans as one of his most representative songs, the “Rainbow Bridge,” has been used in numerous television ads as well as in television dramas to signal the start of a romantic scene.

The 39-year-old Barakatt, from Quebec, Canada, is best known as a pianist, however, his “adventurous” style sometimes transcends that typecast.

Barakatt not only writes pieces for the piano, but also for the symphony. He sings and works as a producer. He collaborated with numerous artists in Korea including K-pop artists such as Wheesung, John Park and Shayne as well as other new age pianists including Yuhki Kuramoto and Yiruma. His efforts to break out of his comfort zone led him to being appointed as an ambassador of Unicef Canada, where he ended up producing an anthem for the organization. The appointment forced him to cancel several “paid concerts” to focus on this “mission” that took him a full year. To celebrate Valentine’s Day, Barakatt arrived in Korea on Monday to spend time with his “valentine” - his Korean fans. Barakatt will be performing with his band in smaller venues in Seoul and Busan and will stage his major concert on Sunday at the Seoul Arts Center. 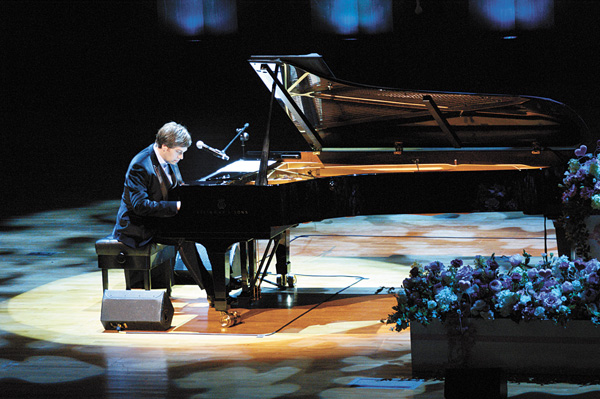 The Korea JoongAng Daily interviewed the artist on Tuesday at the Plaza Hotel in central Seoul.

Here are excerpts from the interview:

Q. You said you are from a Lebanese family. How did that impact your upbringing as a musician?

A. I started piano at the age of 5. Then immediately, music became my life. I switched to classical music, and I also started learning jazz and improvisation in my teens. Then pop music came along and the development of technology also allowed me to create my own arrangements in my late teens. I began studying the symphony and tried to mix styles and create a new approach to music, which combines all these styles. My father was a musician. Growing up in a Lebanese family, music played the major role in my family. Almost all my cousins and uncles play a musical instrument. It was just part of our life, so pursuing a music career was just so natural for me. For some people music is another world but for us, music is just our life.

What is your objective in your music?

There are many objectives of course. On the music aspect, it’s always to recreate yourself. Because when you do music, you can create one style but I didn’t want that. I love exploring. I play piano solo but I like to play with symphony orchestra. I like to play with jazz musicians and also collaborating with other musicians from different genres. So I think the process of creating music is also the process of changing yourself, your own style and trying to explore. So what I do is I try to collaborate with many artists. I try to create new projects. And then I become more creative. For me, that’s the way I approach music on an artistic level. As a human being, of course, my involvement with Unicef is very important. To be able to communicate to the world through your music and passion, with your values and realizing how important it is to help children, is how I see my music in a humanitarian approach. This is actually getting bigger and bigger. I want to be more involved in such activities. In short, it’s important for me to communicate positive values with the people through music.

I saw the music video of the “Lullaby” you produced for Unicef. Tell me about your involvement with Unicef.

The Unicef story is very interesting because it was very natural. First, I was always doing charity before being involved with Unicef and also in the Canadian community, helping many foundations. One day I was approached to do the artistic direction of the James Bond concert in Quebec because the movie festival was doing a special event with Unicef. During this event, I got to know Roger Moore, who was a guest of honor for this celebration, and I was greatly inspired by him. I discovered Unicef in a different way. Of course, I knew about the organization on the surface, but I learned so much more through him. Roger Moore had such charisma and when he was making a speech about what Unicef is to him, I was immediately very touched. After this incident, Unicef Canada called me and my wife to meet in Toronto and we met the president of Unicef Canada. And we officially became the first couple to be appointed as Unicef ambassadors in 2007.

Then you created the anthem for Unicef. How did that begin?

Actually, the inspiration or the idea of creating it came after a conversation I had with Harry Belafonte, the “King of Calypso.” He was also a Unicef ambassador who came for a conference in Canada. During the few days we spent together, we had a great conversation about how music could influence people and trying to make a difference through arts and music. And he told me about the charity song “We Are the World,” as he was behind that project back in the 1980s, where a group of artists got together.

Then Harry said to me that I should create a symphony for Unicef and he suggested that maybe I can bring on board several artists, but instead of doing America for Africa, he told me that I should do “world for the world.” After talking to him, I started to imagine how we could create a symphony or an anthem for Unicef because the organization already had a flag but it didn’t have an anthem.

So in 2009, there was a huge celebration for the 20th anniversary of the Convention on the Rights of the Child, which is the most important agreement signed by all nations. I thought the timing would be fantastic to release the Unicef anthem.

So I started working, which was a long process. It took almost a year to create the entire production. And we had more than 15 ambassadors on board from Jackie Chan to maestro Chung Myung-whun from Korea as well as Richard Yongjae O’Neill and Nana Mouskouri from Greece, and we had so much involvement from all over the world so it was a great experience and we could reach thousands of thousands of people.

The goal of this project was to show the reality because it is so easy to forget about the reality of this world, the fact that we live in a world where in some parts of the world, children are still in need. Sometimes, or very often we forget it because we are just busily living our own lives. So I wanted to create an anthem as a reminder to explain to the people, “Look, we signed the Convention. Look at the situation now, we have hope, we can build a better future, but still, there’s drama.”

Because it’s the only thing that you can do when you are in a situation where you don’t have anything to give to your child. The way to express your love for your child is to sing a lullaby. It’s probably the only justice that any parent can have to sing a song and try to give love that you can. And the lullaby is a universal gesture and it’s why we started with this approach and concept. I wanted to create the biggest lullaby ever written with more than 250 artists. Of course, it was very challenging to bring on board so many people for the same project, but I am very proud of this initiative. It took me almost a year as a volunteer and I had to cancel a lot of projects because I wanted to focus only on this one. It was a mission for me, a very important mission.

In 2003 you decided to undertake a large project of composing a major symphonic work based on the 16 stages of human experience. You worked on it for 30 months. Can you explain more about this project?

It is called the “Symphony of Life” in English. In Latin, it’s called “Ad vitam aeternam,” which means eternal life. It shows my vision of life - from life’s origins through birth, from birth to death and from death to eternity. It’s a philosophical approach. So the goal is to provide an opportunity for introspection of your own life. We live in such a hectic world where we rarely have time to think.

So the goal of this project was to make people realize and to face the reality that you come from somewhere and you end up going somewhere. It’s an initiatory journey through life’s meaning and our own place in today’s constantly changing world. It’s also a different approach to the symphonic tradition, with shorter sequences and rhythmic variations that keep audiences engaged and attentive.

Do you have new projects that you are planning to “explore?”

Certainly. I’ll start working for a very special project, which is to create a symphony on Kahlil Gibran’s “The Prophet,” which is the second most popular book after the Bible. It’s a book that you can read in one day but you won’t understand it in one life. It’s very deep so you must not read this in one go. You can read one poem a day and five years later, you can read the same one and you’ll still be able to realize something new.

This is what I wanted to portray in this new project. I’ll create 26 different movements based on the 26 different subjects in “The Prophet.” I went to see Kahlil Gibran’s museum in Lebanon and I was very inspired to create music about love and children.

- Certificate of acknowledgement from the United Nations (2004)

- Recipient of the Pierre-Garon prize (Artist of the year, Quebec City) (2006)