With sixth Korea concert set, Mraz is in his comfort zone

With sixth Korea concert set, Mraz is in his comfort zone 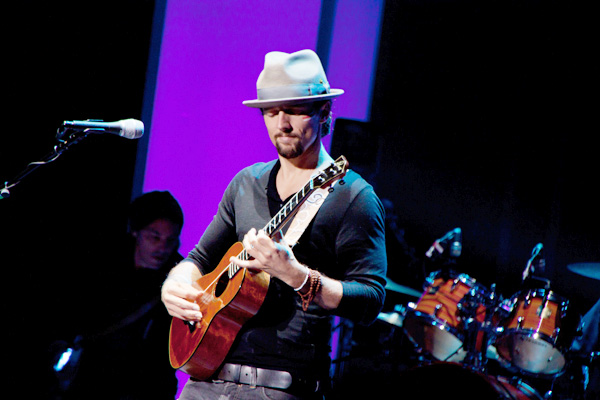 Many Koreans pick American singer-songwriter Jason Mraz, 35, as their favorite international singer. Although his latest album, “Love Is a Four Letter Word,” isn’t a mega-hit like the previous one with the hit song “I’m Yours” in his home country, Mraz remains a chart-conquering artist in Korea.

Mraz, who is loved not only for his heartful songs but also for his concern for global issues such as human rights for all and environmental preservation, took time for an e-mail interview with the Korea JoongAng Daily ahead of his concert in Korea on May 17.

Q. The upcoming concert will be your sixth in Korea. How different will this be compared to your latest one in last June or any of your previous concerts? 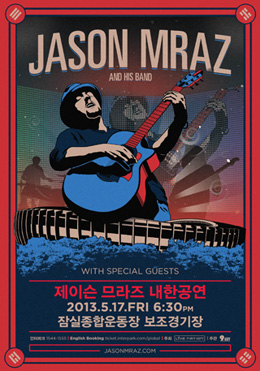 According to the organizer 9 Entertainment, Jason Mraz designed his own poster for the upcoming Seoul concert. Mraz will stage a concert at 6:30 p.m. on May 17 at the Assistant Stadium of the Jamsil Sports Complex. Provided by the organizer

A. I think the only thing different is that I have a higher level of expectations. Because the first couple of times we came, the audiences were just crazy. They were the loudest, with the most dancing, jumping up and down audience that we’d ever played in front of. And that’s the truth.

I would tell people all over the world. They say “What’s the wildest place you’ve played?” I’d say, “Korea, because the audience over there just goes crazy.” I never expected that the first few times I went, and yet it was always there, so that’s the only thing that’s really different. When I come back now, it’s like, “Wow okay, this audience better be on,” and if they’re not, then we’re doing something wrong.

I think you are getting more love from Korean fans. Why do you think you and your songs are so appealing to Koreans?

When music comes on, we’re all just human beings. The political and geographical borders all dissolve away, and we’re all just one big happy family. So it’s tough for me to really understand why some crowds go crazy and other crowds don’t. And, obviously, I don’t live in Korea so I’m not sure what’s trending there or if my music happened to just fall into something that people were wanting to hear at that particular moment. Or if, indeed, the message resonated deeply to where it was part of the understanding of that culture.

It’s tough to say, but I would like to think that my music being embraced there or Psy’s music being embraced all over the world, for instance, is an example of all of our humanness coming together to understand the unity in our diversity and how music can really bring us all together.

What will your upcoming concert be like? I heard there’s going to be a special guest. Can you reveal who that will be?

For the concert, we’re going to rock. We’re going to turn it up. And I’m going to premiere some new songs. You’re not even going to know they’re new because they’re so good. They sound like old songs. The first time you hear it, you’ll be like, “Oh, I know this one.”

We’re also planning a special surprise. There’s a great guitarist in Korea by the name of Jung Sung-ha. He’s a great guitar player, I’ve seen him on YouTube and I’d love to invite him to come and play.

I heard you are working on releasing a documentary film to share about the severity of global warming. Can you explain more about this film?

It is about my trip with Al Gore’s Climate Reality Project to Antarctica. I learned a great deal about how climate change is having an impact on our lives, and I would like to share this experience with people and help them learn more about the reality of climate change.

You’ve designed your own poster featuring you playing a guitar above the Jamsil Sports Complex, which will be the venue. Do you like how it turned out?

When I saw that, I was impressed. I was honored. I really am honored to have made it this far in such a short time and to feel so loved and supported.

It encourages me, it inspires me, it makes me want to work harder and play harder and write better songs, and more songs, and try to tap into what it is that I think people want to be dancing to. When I saw that poster I thought, “Wow it’s on. It’s really on now.”

VIP package for Mraz’s upcoming concert includes a ticket to watch Mraz’s rehearsal before the concert as well as a VIP seat, which will be the closest to the stage and a special gift pack prepared by Mraz himself. The concert will be held at the Assistant Stadium of the Jamsil Sports Complex at 8:30 p.m. May 17. Special guests will start performing at 6:30 p.m. Tickets range from 110,000 won ($101.40) to 250,000 won (VIP tickets). For more information, call (02)332-3277 or visit ticket.interpark.com.