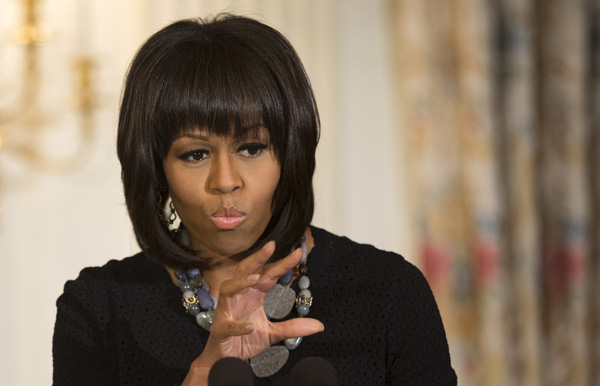 WASHINGTON - Michelle Obama on Wednesday gushed over the Oscar-nominated film “Beasts of the Southern Wild,’’ calling it one of the “most powerful and most important” movies in a long time in a ringing endorsement delivered less than two weeks before this month’s Academy Awards ceremony.

The first lady commented during a Black History Month workshop at the White House for about 80 middle and high school students from Washington and New Orleans. The movie was set in Louisiana.

Students saw the film, then got to question director Benh Zeitlin and actors Dwight Henry and 9-year-old Quvenzhane Wallis, who is up for an Oscar.

Wallis stars in the mythical tale of a 6-year-old girl named Hushpuppy struggling to survive in the southern Delta with her ailing father as a storm approaches. Her world consists of a tight-knit, shantytown community on the bayou with wild animals, both real and imagined.

The first lady said “Beasts” makes viewers “think deeply about the people we love in our lives who make us who we are” and shows the strength of communities and the power they give others to overcome obstacles.

“It also tells a compelling story of poverty and devastation but also of hope and love in the midst of some great challenges,” she said.

Mrs. Obama also said it was “cool” that “there are so many important lessons to learn in that little 93 minutes.”

“That a director and a set of writers and producers can say so much in just 93 minutes,” the first lady told the students. “And it doesn’t always happen in a movie, quite frankly, but this one did it, and that’s why I love this movie so much and why our team wanted to bring it here to the White House and share it with all of you.”

Mrs. Obama also used the film to inspire her young audience, noting that Wallis was just 5 years old when she auditioned for the part and Henry, who runs a bakery, had never acted a day in his life.

“You all have to really be focused on preparing yourselves for the challenges and the opportunities that will lie ahead for all of you. You’ve got to be prepared,” she said, urging them to go to school, do their homework every day and follow her husband’s example by reading everything they get their hands on. AP