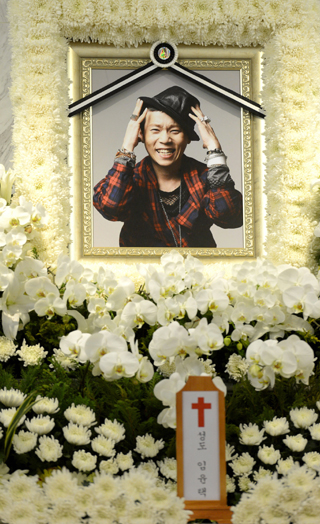 Ulala Sessions’ frontman Lim Yoon-taek’s funeral went on without a hitch on Feb. 14.
On the sad day that coincided with Valentine’s, Lim’s bereaved wife Lee Hye-rim sent an SNS message to her husband and father of her new baby girl.
“I’m ready to say goodbye with a glad heart,” said the widow. “You’ve shown all that a man can be . . . I’m so proud to be the wife of such a man. I know we’ll meet again so wait a little longer. I love you,” wrote Lee on her SNS page.

She also added that it was a relief that Lim was suffering no more and he would be in a better place now with God, watching down on her.
“Farewell my love, Li-dan’s dad,” signed off Lee.

Lim, who won the third season of “Super Star K” in 2011, married his girlfriend last August, and the two have a baby girl who turned 100 days old last month.
After battling cancer in front of the nation for the past year and a half, Lim will be put to rest at a cemetery in Bundang, Gyeonggi.