Among smart TVs sold in Korea, Samsung Electronics and LG Electronics excel against Japanese competitor Sony and run neck and neck with each other, the Korea Consumer Agency said yesterday.

Of smart TVs costing 2 million won ($1,844) or less, LG offers a better picture while Samsung holds the edge in sound, according to a report in cooperation with the Fair Trade Commission.

The situation is reversed among high-end smart TVs retailing for more than 2 million won, with Samsung’s screen quality equal to LG’s while it maintained its audio edge. 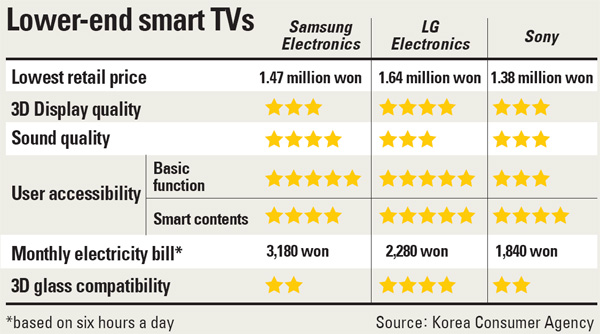 It was the first time the consumer rights group compared smart TVs, and it chose two products from each of the three major companies to evaluate.

“Although smart TV has many enhanced functions compared to regular digital TVs, they come with a higher price tag,” said the agency in a release. “Hence, consumers should consider for what purpose they purchase TVs.”

If a consumer wants to watch 3-D videos or surf the Internet, it may be worthwhile to choose a smart TV, the agency said.