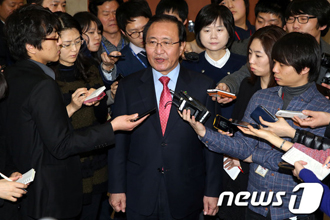 Roh Hoe-chan, co-chairman of the Progressive Justice Party, lost his parliamentary seat after the Supreme Court upheld his conviction for going public with a conversation that had been illegally taped.

In 2005, the former labor activist and liberal icon made a bombshell revelation that he had obtained a secret audio recording by the National Intelligence Service of a 1997 conversation between Lee Hak-soo, then-chief secretary to Samsung Group Chairman Lee Kun-hee, and Hong Seok-hyun, then-president of the JoongAng Ilbo.

Roh said that in the conversation at a local restaurant Lee and Hong said they bribed seven high-ranking prosecutors including Ahn Kang-min, head of the Seoul District Prosecutors’ Office, ahead of the Chuseok holiday.

They also reportedly discussed supporting a certain candidate ahead of the December 1997 presidential election.

Roh said a secret NIS team called Mirim taped the conversation illegally and he had obtained the audio file of it. He posted a press release on the Internet that included the names of the seven prosecutors. Ahn filed a defamation suit against Roh.

A first trial in 2009 sentenced him to six months in prison, suspended for two years, for defamation and privacy violation. An appeal trial acquitted him. The Supreme Court said Roh was not guilty of defamation but was guilty of publicizing an illegally taped conversation. The case was sent back to the appeals court.

In 2011, the appeals court gave him a four-month suspended prison term for publicizing the conversation, which was upheld by the Supreme Court yesterday.

Speculation is rising that it could be Ahn Cheol-soo, another liberal icon who has been in the United States since the Dec. 19 presidential election. Ahn ran in the election as an independent but bowed out in favor of fellow liberal candidate Moon Jae-in.

“So far, the previous by-elections had no meaning to us, but this April election for a Seoul seat is different,” a former official of Ahn’s camp told the JoongAng Ilbo. “[In the by-election], voters will decide who the owner of the opposition is.”

A total of 159 ruling and opposition lawmakers signed a petition to revise the Communications Privacy Act so Roh could keep his seat.

The Supreme Court upheld a ruling that convicted Lee’s campaign manager of bribing voters ahead of the April 11 legislative elections in which Lee won a geographic seat in Busan.

Under the law, if a campaign manager of a lawmaker is sentenced to more than 3 million won in fines on charges of violating the election law, the lawmaker loses his or her seat.