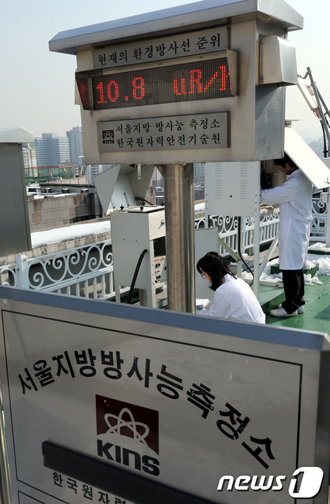 South Korean scientists failed to detect critical radioactive gas from air samples collected over the East Sea that could have proven whether North Korea used an enriched uranium device for its third nuclear test.

Using helicopters, the Navy collected air samples for 12 hours after the underground nuclear weapons test Tuesday, with winds blowing from the north, to try to catch any radioactive leakage from the nuclear test site in Punggye-ri, the northeastern tip of North Korea.

They brought the samples to the Korea Institute of Nuclear Safety, a state-run institute, for analysis.

The smoking gun they were looking for was a radioactive material called xenon. The types and amounts of xenon isotopes can demonstrate whether the North tested a plutonium- fueled device, as for its first two tests, or a uranium-fueled device.

When the North conducted its second nuclear test in 2009, the South’s scientists failed to detect any leaked gases.

Footage recently broadcast on the North’s official Korean Central Television showed that the tunnel at the Punggye-ri test site was designed like the one used in the 2009 test. In an effort to block leakage of radioactive materials from the underground test, the winding tunnel leading underground had 10 doors.

After the test Tuesday, Pyongyang announced it had succeeded in producing “miniaturized, lighter” nuclear bombs. Concern is rising that if true, the North is closer to being able to place a nuclear bomb small and light enough on its long-range ballistic rocket Unha-3, which reportedly can reach U.S. territory. Scientists say the smaller and lighter weapon would be fueled by uranium.

But the South Korean military and the National Intelligence Service publicly said the North has not developed those capabilities based on the size of the artificial earthquake set off by the nuclear test, which they said was a magnitude of 4.9.

The government says the explosive force of the device tested Tuesday was about six or seven kilotons of TNT bombs. The Defense Ministry said a normal nuclear bomb has a strength of at least 10 kilotons, like the one dropped on Hiroshima during World War II, which was 10 to 15 kilotons.

However, the Federal Institute for Geosciences and Natural Resources (BGR), a state-run geology research institute of Germany, estimated the explosive power of Tuesday’s test at 40 kilotons, nearly three times the strength of the Hiroshima bomb.

The German institute added that the Korean government tries to minimize its estimates of North Korea’s nuclear capabilities for political reasons.

A researcher at a state-run institute told the JoongAng Ilbo on the condition of anonymity that North Korea could have already deployed nuclear weapons on its bases.

“North Korea has recently unveiled a mobile launch pad for intermediate-range ballistic missiles,” the researcher said. “We view this launch pad as being capable of loading a nuclear weapon as well. North Korea has always unveiled its weapons after it deployed them on actual bases.”

A North Korean defector who claimed he was involved with development of military weapons for the regime said, “Although I haven’t seen any missiles loaded with a nuclear bomb, I’ve heard that the military has deployed a nuclear missile.”

It said that the forces of imperialism possess nuclear weapons and ICBMs, and so could North Korea.

The editorial said that nuclear armaments were “the heaviest punishment against imperialism.”

The resolution called the test “a grave provocative act” and said, “The North should take all responsibility for anything that happens next.”

It also demanded Pyongyang abandon its nuclear program and return to the Nuclear Non-Proliferation Treaty that the regime abandoned in 1993.

However, all six lawmakers of the opposition Unified Progressive Party, which has been criticized for a pro-North stance, refused to agree to the resolution and called for “a resolution through dialogue.”