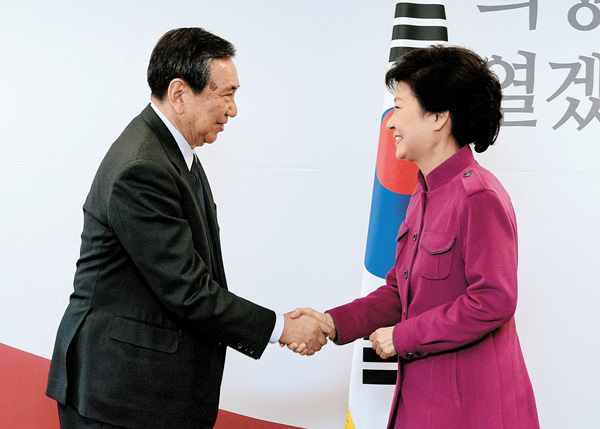 South Korean President-elect Park Geun-hye yesterday called for future-oriented ties with Japan, saying historical issues stemming from Tokyo’s colonial rule of the Korean Peninsula should not get in the way, according to her spokeswoman.

Park met with former Japanese Chief Cabinet Secretary Yohei Kono, who in 1993 made an official apology to women who were forced into sexual slavery for Japan’s World War II soldiers.

The issue of the former sex slaves, euphemistically called “comfort women,” has long been a thorn in relations between Korea and Japan. Historians say up to 200,000 women, mostly Koreans, were coerced into sexual slavery at frontline Japanese military brothels during World War II.

“Historical issues should not irritate public sentiment or disrupt future-oriented development at a crucial period for Korean-Japanese cooperation, and expressed hope that Japan’s perspective would stem from an understanding of the victims’ pains,” the spokeswoman quoted Park as saying.

South Korea has expressed concern that the new Japanese government under Prime Minister Shinzo Abe is increasingly assertive on a far-right platform that includes a possible revision to Kono’s apology.

In the meeting, Kono said he hopes younger Japanese politicians will take a serious attitude to learning history and resolve the issues of the current generation to pave the way for a new future for younger generations, according to Cho.

Kono is in Seoul for an academic forum on relations between South Korea and Japan.

The two also discussed North Korea’s recent nuclear test and agreed that the international community should work together to resolve the issue, the spokeswoman said. Yonhap