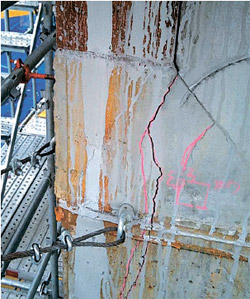 A precision safety diagnosis will be conducted on the 555-meter (1,820 foot), 123 story Lotte World Tower in Jamsil, southern Seoul, where cracks, visible to the naked eye, were found in eight mega-columns of the skyscraper.

The Seoul Metropolitan Government said yesterday they have formed a joint team with construction experts from the Architectural Institute of Korea and officials from the Korea Infrastructure Corporation and will conduct a precision safety diagnosis on the Lotte World Tower until March 7.

The municipal government said the Architectural Institute will lead the diagnosis and the Infrastructure Corporation will verify the assessment result.

Earlier in the month, the JoongAng Ilbo exclusively reported that 11 large cracks have developed in eight mega-columns that are intended to support most of the weight of the skyscraper, which would be the tallest building in Korea if completed.

The mega-columns are now 17 stories high and cracks were found on the 5th, 8th and 9th floors. After the problem was reported, the city government sent three specialists, including an architecture professor to the site to inspect the building.

“We decided to conduct the diagnosis in order to relieve citizens’ anxiety over the Lotte World Tower,” said Lee Geon-ki, director of Housing Policy Department from the city government. “We will carefully manage the entire process of the inspection.”

The Lotte World Tower, which is supposed to be completed by October 2015, will be the centerpiece of the second Lotte World amusement park, which is being built on 26,500 pyeong (21.6 acres) of land in Songpa District by Lotte Engineering and Construction.

Last year, Hanmi Global, a construction inspection company, wrote in a report that they found serious cracks in the concrete that was welded with steel frames into mega-columns. They warned the builder, Lotte E&C, that additional welding work for other columns should not be allowed until architects and construction supervisors develop new welding methods, but the suggestion was ignored.