Motgol proves that Korea’s markets can make it

Motgol proves that Korea’s markets can make it 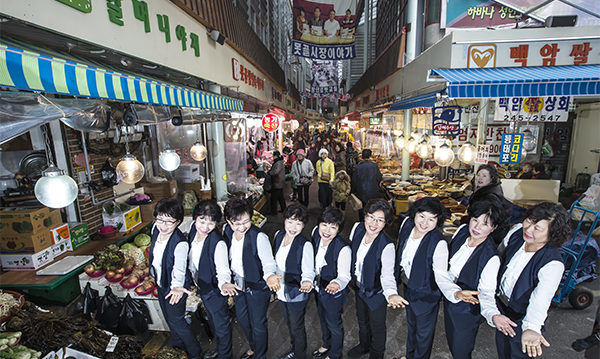 The members of the Jumma Complaint Choir perform at Motgol Market in Suwon, south of Seoul. Made up of female merchants, the choir has helped turn the small, traditional market into a hot spot. By Shin Dong-yeon


The Lunar New Year holiday is over and most people have dragged themselves back to the cold reality of urban life to pick up their mindless survival game where they left off.

But there is hope, in the form of the nation’s marketplaces. These outposts of traditional wheeling and dealing between merchants and customers are a great way to shake off the post-vacation blues with a bit of good, old-fashioned human interaction.

Fighting to stay afloat in a modern world of chain supermarkets, some markets have turned themselves into places of entertainment to lure in more customers. One place that’s leading the pack is Motgol Market in Suwon, Gyeonggi, where people can buy goods from DJs, singers and cooks.

“Hello, this is DJ Tteok Hana. You just heard ‘Star, Wind, Sunshine and Love’ by Kim Jong-kook. We’ve got a funky one for you up next, Kim Hyun-jung’s ‘Mung.’?”

This was the broadcast that greeted a reporter entering the market recently. While the song was being played, the DJ occasionally broke in to offer tips on how vendors can make Motgol a more welcoming place.

“Customer management needs to be done with your heart, not with your brain,” said Tteok Hana. “A marketing sensibility where we open our hearts to customers will win people back.” 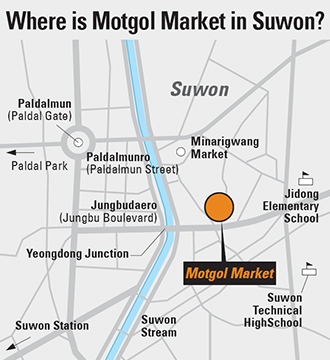 The piped-in program was emanating from Motgol On Air MGBS, a small radio station based in a makeshift studio in the market. You can even drop a song request into a mail box situated in front of the studio.

These in-house radio stations, for vendors and by vendors, can now be found in open-air markets around the country including Gagyeong Terminal Market in Cheongju, North Chungcheong, Jayu Market in Mokpo, South Jeolla and Oedong Market in Gyeongju, North Gyeongsang.

The idea for the stations was part of the Ministry of Culture, Sports and Tourism’s Munjeonseongsi project, which was launched in 2008. “Munjeonseongsi” refers to a place that brims with visitors like a market.

Playing with the old expression, the ministry created a series of phrases with the acronym Munjeonseongsi that means “A pilot project to revitalize traditional markets through culture.”

Moktgol was designated the first Munjeonseongsi market in October 2008. By 2011, 20 more markets had followed suit.

The in-house radio stations are only part of the entertainment programs that have been implemented.

Merchants at Motgol Market also stage a musical, screen a film they produced and hold cooking classes using ingredients that can be purchased in the market.

That helped transform the 40-year-old, little-known market into one of the hottest in the region. Now, up to 20,000 people visit Motgol daily, many from outside the region. Average sales per store have doubled over the past four years, the merchants say. 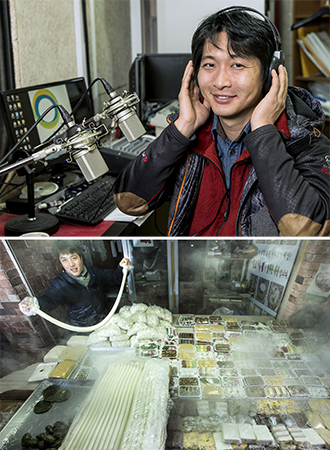 Clockwise from left: 1. Kim Seung-il, the owner of “Son’s Mandu” whose suggestion sparked the creation of the Jumma Complaint Choir, is also one of the DJs for “Motgol On Air MGBS,” the market’s in-house radio station. 2. DJ Tteok Hana sells tteok (rice cake) at the market when he’s off-air. By Shin Dong-yeon

Kim Jong-dae, the ministry official in charge of the project, credited Motgol’s success to voluntary efforts by the merchants. He said the project made them believe that they could really bring the people back.

“Motgol Market has become a principal place in Suwon,” said Lee Chung-hwan, the head of an association of Motgol merchants.

Another significant force behind Motgol’s success is the Jumma Complaint Choir.

Comprised of female merchants, the choir was established in early 2009 at the suggestion of Kim Seung-il, the owner of “Son’s Mandu,” a dumpling shop at Motgol.

The suggestion brought in several female merchants in their 50s or 60s, many of them thinking in the beginning that it was just for fun. Every Thursday, they gathered after business hours and took singing classes from composer Choi Jong-hyeok.

The songs they sing are mostly about complaints merchants have about customers.

“We’re sorry that you just want to leave after all the looking and touching,” one song starts. “You only ask where the food is from at traditional markets, not at department stores. And you only haggle at markets. You willingly pay everything, down to the penny, at department stores.”

The song became an immediate hit in the market. Word spread, and the choir was invited to a merchants’ gathering in Daejeon in October last year, where they performed for President Lee Myung-bak. They’ve held over 50 shows in other regions so far.

“You will never know how famous this market has become thanks to us,” said Kang Kyung-soo, a choir member who sells side dishes. “I’m sorry my husband has to do all the work while I’m away, but he still tries to find every moment to encourage me to go and perform.”

There are 21 Munjeonseongsi markets across the country. Here are some others of note. 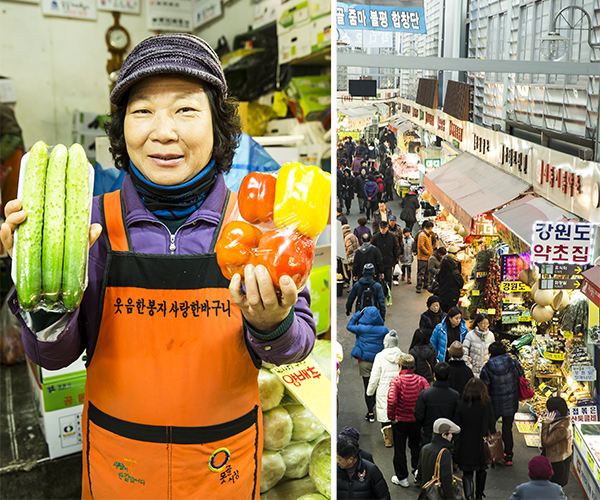 Clockwise from left: 1. Motgol Market now teems with visitors thanks to its cultural upgrade. 2. Park Myung-bok, the owner of a grocery store, is one of the many merchants who have regained their smiles with Motgol’s rising popularity. By Shin Dong-yeon

Cattle farmers used to take a break at this market on their way to the cattle market in Majang-dong, Seongdong District, Seoul. Urim was known for its taverns and the market still tries to keep the tradition alive, selling liquor like makgeolli rice wine to hikers heading to the nearby Mt. Yongma. A samulnori troupe also performs traditional drum music on a regular basis.

This market is known for its education program for young students. As part of a partnership with the nearby Munsung Elementary School, the students of the school visit the market every Saturday to learn the basics of doing business.

This market has transformed itself into a tourist venue. It sells many traditional items that tourists from abroad buy as souvenirs. Hanwoo, the Korean beef that’s a famous regional specialty, is on sale through an open-bid auction. Visitors can also participate in several activities with traditional craft artisans such as Kim Seong-hwan, a straw craftsman, and Kang No-sim, who works with bamboo.

Young artists have graced the winding alleys of this market with so many murals and art pieces that it has earned the name “Alley Gallery.” The residents volunteer as tour guides, showing visitors around every Saturday.

Many sections of the walls of this market, a total of around 300 meters, are covered in canvas, where local college students drew the history of the market.

Performing artists put pantomime performances on at this market. A visitor also can try their hand at making paper crafts for 10,000 won ($9.27).