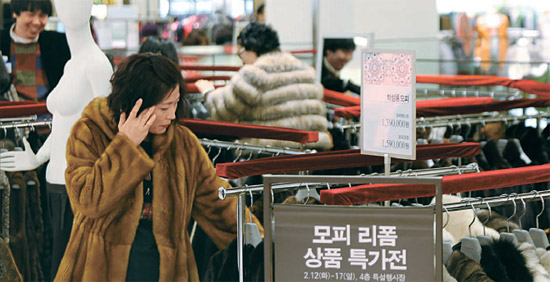 In the midst of a continuing economic downturn, flea markets for selling used and repaired fur products have emerged at large department stores.

The fourth floor of a Shinsegae Department Store in Uijeongbu, Gyeonggi, where women’s suit and designer brands were lined up, was crowded with customers on Tuesday afternoon.

“I came from Junggye-dong, northeastern Seoul, after I saw ads that the department store was selling fur products at cheaper prices. I wanted to buy a fur coat for my wife, who had to work hard for the Lunar New Year,” said 49-year-old Lee Chun-beom.

“I received 50 phone inquiries this morning alone, which is very rare,” said Lee Hyun-jin, a buyer responsible for the fourth floor at Shinsegae.

With the cold snap this winter, the demand for fur clothes increased, but as the price of hides increased, the cost of coats exceeded 5 million won.

Shinsegae has been conducting the “Collecting Fur” event since November, encouraging customers to bring in their secondhand fur clothes for appraisal and receive gift certificates in exchange.

More than 400 people turned in fur clothing over two months, and the department store had the items professionally transformed.

The rising popularity of fur flea markets has been accompanied by a decline in demand for luxury goods and holiday gift sets.

“Sales of gift sets for the Lunar New Year this year fell 9.7 percent compared to last year,” said a spokesman at E-Mart.

Sales of Korean traditional sweets and cookies were down 37 percent and salt-cured yellow corvina 30 percent.

Sales of pear sets, prices of which went up recently, fell 22 percent at E-Mart during the Lunar New Year holiday season from a year earlier.

The only items that saw their sales increase were sets of low-cost socks and relatively cheap apple sets.

Homeplus saw its sales decrease 3.3 percent during the same period.